6 per cent toll hike at Suez Canal in February 2022 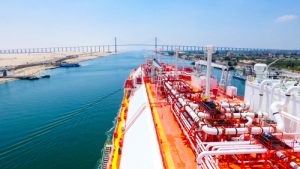 The Suez Canal Authority (SCA) issued a circular dated 4 November 2021 that the toll for vessels transiting through will increase by 6 per cent. However, cruise ships and LNG-powered vessels are exempted from this rule.

Concessions to leisure and LNG-power vessels

Admiral Osama Mounier Mohamed Rabie, SCA’s Chairman and Managing Director, clarified the hike maintains the canal’s leading position as the optimum, fastest, and shortest route for clients. It is currently the shortest (193km) and the world’s most heavily used lanes between Europe and Asia, including lands around the Indian and Western Pacific Oceans.

Regarding the concession to cruise ships, Admiral Rabie explained that tourism and travel sector suffered major losses worldwide and is only expected to recover by 2022. However, for LNG-powered vessels, the decision was in light of the most recent variables of the LNG seaborne trade that integrated with the development of flexible marketing policies. The toll was reduced to 15 per cent from 25 per cent as per circular No. (2) in 2015.

Prepping for a lucrative 2022

Admiral Rabie added these resolutions resulted from extensive studies conducted by the economic unit experts affiliated to SCA’s planning and research department. It included examining all variables related to the shipping market, global economic indicators, trade movements, as well as reviewing periodic reports. There were also recommendations by organisations and institutions from the maritime industry and estimates from global financial institutions.

The International Monetary Fund (IMF) forecasted the global economy will grow at rates of 5.9 per cent and 4.9 per cent in 2021 and 2022 respectively. The IMF and World Trade Organisation (WTO) are also expecting continued growth in world trade traffic, and rise in demand for maritime transport at rates of 6.7 per cent and 4.7 per cent respectively in 2022. It would be fair to conclude SCA is prepping itself for a projected fruitful 2022 to make up for losses suffered this year, while appearing gracious to the battered tourism sector in 2021.