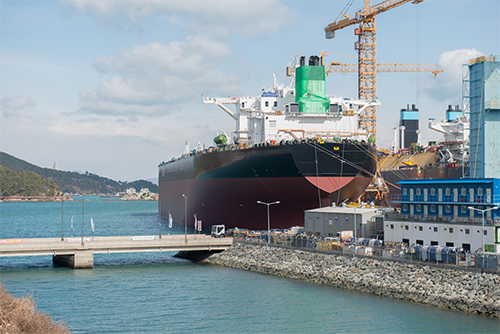 Milestone after a drought since 2013
The stars have aligned for South Korea at least in 2021 for newbuildings. KSOE, a subsidiary of Hyundai Heavy Industries Holdings (HHIH), surpassed its annual target of US$14.9 billion by 30 per cent upon closing US$19.4 billion worth of orders to build 201 vessels including its mainstay liquefied natural gas (LNG) carriers, mega cargo ships, very large crude carriers (VLCC), liquefied petroleum gas (LPG) carriers, and petrochemical carriers.

DSME recently clinched US$850.8 million worth of contracts to build four LNG carriers. With the addition, it has bagged a total of US$8 billion worth of orders for 46 vessels — also overachieving its annual target of US$7.7 billion. This is the first time since 2014 in which the shipbuilder has met its yearly order target. Its order backlog amounts to US$22.2 billion, which equates to two years’ worth of production.

SHI secured a total of US$7.8 billion orders, or 86 per cent of its annual target of US$9.1 billion. The company is expected to achieve the target as early as next month as it is in the final talks with Russia’s second-largest natural gas producer — Novatek, over a deal worth more than US$2.6 billion for seven icebreaking shuttle tankers, six ice-resistant LNG carriers, including two options for Arctic LNG 2 project (Russia’s major natural gas project).

Korea’s eye on pole position
Despite the stellar performance, all 3 builders are not slowing down. In fact, they are reportedly anticipating another jackpot from Qatar Petroleum. The state-owned oil company is said to have signed for over 100 newbuildings with Korea’s Big Three in June 2020. As at 7 September 2021, Korea overtook China in newbuildings consecutively for 4 months.

Data from Clarkson Research Service showed Korea won a combined 780,000 compensated gross tons (CGTs) worth of new orders in August. This equates to 57 per cent of the 1.37 million CGT of global orders. Chinese shipbuilders obtained 370,000 CGTs in new orders, accounting for 27 per cent of the total, with Japanese shipbuilders winning 190,000 CGTs. If Qatar inks another big one with Korea, it might be an opportunity for the EU to deliver a firm “no” to the merger between HHIH and DSME.