Birds at the port 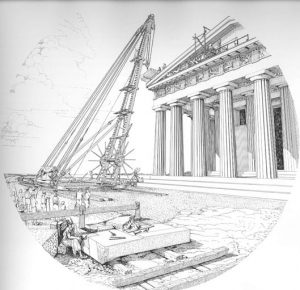 A crane is a device operated manually or with motors for the vertical and horizontal movement of heavy loads. Its name goes all the way back to ancient Greece, named after a bird.

Perfected by technology
It was during construction when its boomed shape resembled a long neck and a bird’s beak. The Greeks hence named it “Geranós, the crane”. The way people called it over the centuries caused the name to be shortened to just “crane”. Back those days, the Romans were not satisfied with plain Grecian cranes. They modified it for lifting heavier loads, and equipped it with treadwheel drives. Today, the Romans’ architectural brilliance stand proud in Italy and Lebanon; Trajan’s Column at 34m and Temple of Jupiter at 19m high respectively.

Despite structural enhancements, the intelligence remains inferior to that of China’s. The crane which secured a space in the Guinness World of Records is at Yantai Raffles Shipyard in Shandong, China. Standing at a remarkable 133m high, the crane demonstrated its prowess on 18 April 2008 by lifting a barge loaded with water weighing 20,133 metric tonnes. While performance is paramount, the person operating the bird must also be skilled. For Singapore, operators must have a license to operate a crane, renewable every 2 years. In other words, crane operators are specialised experts in their own rights.

Cranes have become a staple in maritime as without them, there would be no flow of trade. In fact, the burning question now is how fast can it operate. Cranes’ performance have to be in tandem with port operations as it will determine the throughput. Today, some cranes can lift 2 40ft or 4 20ft boxes simultaneously. It is fascinating that cranes play an important role in the backbone of trade – whose history goes to the ancient times. An idea conceived by the Greeks, modified by the Romans, and perfected by technology.