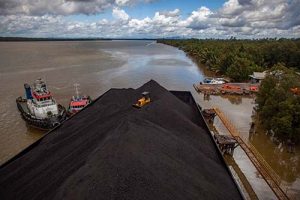 Loaded vessels are progressively allowed to depart, what about the country’s multilateral relations?

Early this month, Indonesia sent shockwaves through the energy markets with a blanket export ban to address its critically low domestic shortage to avoid a power outage. Coal miners were subsequently slapped with permit revokes for not complying and regional clients like Japan and Korea were making contingencies in the event Indonesia extends the injunction.

Will the gradual ease work?
As at 12 January 2022, the Coordinating Ministry of Maritime and Investment Affairs revealed 37 loaded vessels were allowed to depart after obtaining approvals. The Ministry added the export ban was lifted after miners fulfilled their obligations to sell a portion of their inventory to local power plants. The sold supply was to be sufficient for 15 days.

Luhut Pandjaitan, Coordinating Minister for Maritime and Investment Affairs said in the statement, “I request that this be supervised closely so it also becomes a moment for us to improve domestic governance.” As at 20 January 2022, 3 more vessels were permitted to leave for Japan. There were no details on the breakdown of the total number of vessels bound for Japan, including tonnage. What made this more baffling was the fate of the miners and plantations whose licenses were prior revoked for non-compliance.

Yet in a twist, Citigroup’s research note dated 5 January 2022 noted around 490 out of 631 coal miners in the country had not yet fulfilled their domestic market obligations (DMO). These 490 coal miners represent about 35 – 40 per cent of Indonesia’s total production, it added. According to minutes of a meeting between miners and the trade ministry earlier this month, 418 miners did not sell any of their coal to local generators last year.

Data from Refinitiv dated 6 January 2022 revealed around 100 vessels were either loading or waiting to load a total of some 5.9 million tonnes of coal near Indonesia’s main ports off Kalimantan. A week later (12 January 2022), Refinitiv’s numbers increased to 120 vessels were either loading or waiting to do so. Meanwhile, President Joko Widodo’s earlier drastic act would be expected to ruffle feathers of its clients and even local producers for obvious reasons. The wounded companies should be waiting grudgingly for updates on the chances of revoking their earlier revokes.