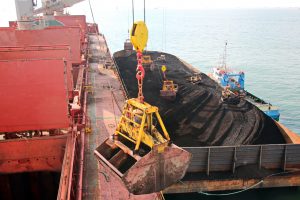 China is Russia’s largest coal buyer – imported more than 50 million tonnes worth US$7.4 billion last year. It accounted for roughly 15 per cent of China’s total imports and was the second largest supplier.

Managing the speed bumps
A Chinese trader lamented, “Most banks have stopped issuing letters of credit after the SWIFT sanctions. As almost all contracts are dollar-denominated, we have no alternatives to make the payment.” Other traders are in discussions with Russian exporters about paying with Renminbi. “We are waiting for their response, but trades have been put on hold,” disclosed another trader who imports Russian coal regularly into Northeast China.

China said it will keep coal output at record levels of more than 12 million tonnes a day, and quicken approvals for new mining projects to ensure sufficient supply as prices surge in the wake of the Russia-Ukraine conflict. Benchmark spot thermal coal prices at Newcastle Port soared 35 per cent over to a record US$353.75 a tonne, incited by fears of worldwide supply shortages as the conflict escalates.

Chinese buyers’ shunning Russian cargoes resulted in a pressing need to boost domestic supply to support ambitious economic growth targets, especially as Beijing maintains an unofficial ban on Australian shipments. China generates more than 60 per cent of its power at coal-fired power plants. The country’s top leaders have reiterated that it should give full play to coal’s basic guaranteeing role in energy supplies. Inventory across China reached an all-time high of 149 million tonnes, enough for 22 days of supply, the NDRC said. As it progresses, it adds more doubt to the country’s net zero commitments.