China to have the world’s largest LNG storage tank 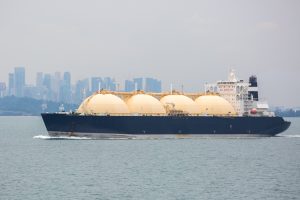 When China’s 2 biggest state-owned LNG importers’ offered to sell dozens of cargoes, traders were surprised and triggered a sell-off in spot natural gas from Asia to Europe. This time, construction of the world’s largest storage tank is in progress, an unmistakable signal on China’s commitment to LNG.

State-owned storage facility
The Chinese state-owned Oil and Gas giant, CNOOC is building the world’s largest LNG storage tanks at the Binhai LNG import terminal, Yancheng in Jiangsu province. The capacity of each tank will be 270,000m3.

CNOOC is the largest LNG importer in China. The Binhai terminal currently houses 4 220,000m3 tanks. After this construction project is completed with the larger tanks installed, the facility will boost the import capacity of CNOOC to the range of 9 million tonnes per annum (mpta). The company is also ambitiously considering the possibility of constructing another 10 tanks, doubling the size of the plant.

It is said that China’s dive into LNG stemmed from its painful power outage last year due to a drastic net zero-oriented move – curbing coal production. President Xi’s announcement to taper off costly imports also catalysed the LNG demand. China was the top importer last year. CNOOC struck US$13 billion worth of deals to boost oil and gas supply, including drilling for oil supply and imports. CNOOC has agreements for crude oil imports and LNG with Kuwait National Petroleum Co. and US-based Energy Transfer LP.

Notably, the republic was last known to be offering its inventory to Europe to make up for the latter’s low supply. With the current Russia-Ukraine crisis, no word was released on whether China is still assisting Europe. Yet, the republic made a deafening statement on its stance on the pretext of neutrality which is far-fetched.