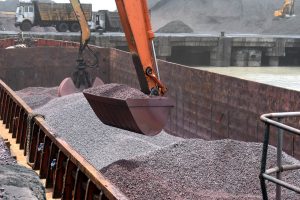 The frantic stockpiling had analysts relook at their forecasts

The republic’s objective to be self-sufficient resulted in a bullish iron ore market as traders and producers stocked up. Intermodal Shipbrokers in its latest report pointed out a hike in iron ore prices just before the Lunar New year.

A spike that puzzled analysts
Prices tumbled unexpectedly to under US$100 per tonne last May. The rebound surprised experts when current prices hit near US$150 per tonne. Christopher Whitty, Intermodal’s Director for Towage & Marine Port Services said, “Looking at Australian iron ore exports to China, it is positive they remained robust last month despite the backdrop of rising market prices due to multiple factors including weather disruption and labour shortage. Industry analysts said the proportion of Australian iron ore in China’s total iron ore imports may reduce to below 60 per cent in 2022 since 2015, especially as China is still diversifying its sources of supplies and deepening industry upgrading while pursuing low-carbon targets at the same time.

“Meanwhile, the prices of iron ore was also reflected in the rising imports in China in recent weeks, warrants an eye on inventory levels as well. According to industry sources, the total inventory of iron ore imported by steel mills across China reached about 117.57 million tonnes on week of 7 February 2022, an increase of 470,200 tonnes from the previous month. Of course it is always possible that the price increase could be related to seasonal speculation itself.”

“Overall since 2015, China’s iron ore imports from Australia and Brazil have accounted for nearly 80 per cent of all imports, of which Australia’s have exceeded 60 per cent. Bilateral relations between Austalia and China have soured again, which caused disruption for trade activities. Iron ore exports are still among the few remaining products enjoying high demand in China, partly due to the needs of its construction sector,” Intermodal highlighted.

Intermodal added, “The import proportion from Australia in 2022 is likely to drop below 60 per cent, having been 61.6 per cent in 2021 and 62.5 per cent in 2020. We also heard a lot about policy changes and the potential domestic supply of iron ore in China, which may re-shape the market dynamics in the future.” Combine the developments in construction and marine which require iron ore, plus China’s gradual tapering of Australian imports, the industry observers have no reason to be surprised.