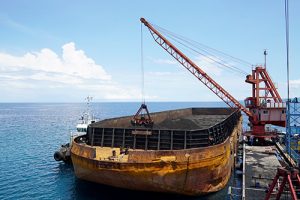 The country’s coal miners are struggling to digest the month-long export ban imposed by Ridwan Jamaludin, Director General of Mineral and Coal at the Energy Ministry. President Joko Widodo dished a nasty threat to revoke export and business permits for coal producers that failed to fulfil domestic obligations!

Local crisis may get international
President Widodo said, “The priority is to fulfil domestic needs. There is already a DMO mechanism by which mining companies should do so. Companies that are unable to may be subject to sanctions. If necessary, not only not getting an export permit, but also revocation of their business license.”

Market sources revealed some miners are prepared to declare force majeure over their inability to deliver under circumstances not within their control. In other words, they are “not responsible” for the severe (coal) shortage elsewhere given Indonesian exports are halted. Force majeure literally means “greater force”, a clause that is included in contracts to remove liability for natural and unavoidable catastrophes that interrupt the expected course of events which prevent parties from fulfilling obligations.

Force majeure’s relevance is debatable given it is typically associated with events which no party can be held accountable, such as natural disasters. They must be unforeseeable, external to the parties of the contract, and unavoidable. These concepts are defined and applied differently depending on the jurisdiction.

The Energy Ministry disclosed the ban was imposed because coal stockpiles at some state-owned PT Perusahaan Listrik Negara (PLN), power plants dropped to critically low levels. PLN’s power plants experienced a coal supply deficit towards end-2021, as coal producers failed to meet their DMO. Jamaludin highlighted nearly 20 steam power plants with a power of around 10,850 MW could have been impacted if the export ban was not enforced.

While Jamaludin’s order was apparently to avoid the fury of some 10 million consumers, President Widodo’s order would essentially break the thin ice underneath Indonesia given its high export volume to mammoth economies like India and China. Either option adopted would threaten national economy.

Miners now have every reason to hold their breath in indignance, for potentially being collateral damage from possibly strained trade relations. It would be fair to conclude Indonesia is rolling the dice with major economies, if not oblivious to the volatile conflict between Australia and China over coal. It is not wrong to address local shortage first, but to dish a warning of such scale will likely result in an actual supply shortage affecting local and international markets.