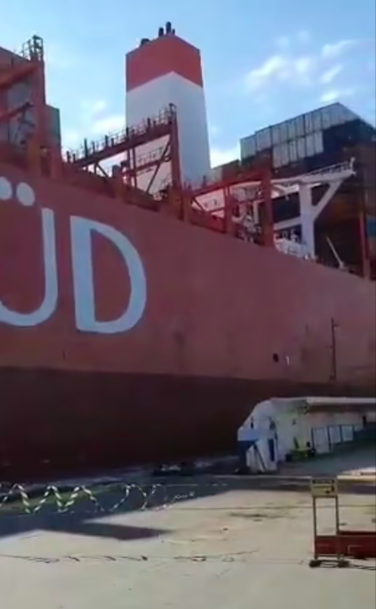 After a toppled crane in Taiwan, a pontoon was torn apart in Santos

Shortly after a ship’s taking down a crane at a Taiwanese port, a 330m long cargo vessel, Cap San Antonio destroyed a passenger dock in Brazil. Workers who filmed the account were sent running for safety when part of the dock was dragged into the waters.

Cap San Antonio is owned by German firm, Hamburg-SUD. Media footages revealed the mega carrier slammed into a passenger loading pontoon in the process of leaving the Santos-based port. The dock broke with parts pulled by the vessel, and the remains loose and floating. The parts stuck to the vessel eventually broke free.

Its ballast tanks were suspected to be punctured during the collision as water gushed out while the vessel continued sailing. Cargo vessels typically have several ballast tanks that are filled and emptied of water as the ship loads and unloads its cargo to help maintain stability in water. The vessel is now docked at Santos awaiting repairs and investigations. Reports said the San Antonio was heading to Paranagua, a 180-mile voyage away towards the south. Similar to the colossal collision at Taiwan’s port, no injuries were reported (fortunately) at Brazil.

Industry experts noted the San Antonio operates on the North Europe – East Coast South America service and has a capacity just shy of 10,000 TEU. Cargo owners with boxes onboard could only hope the repairs are executed swiftly ; the vessel is said to account for almost 50 per cent of the coming week’s planned direct capacity from East Coast South America to Northern Europe.