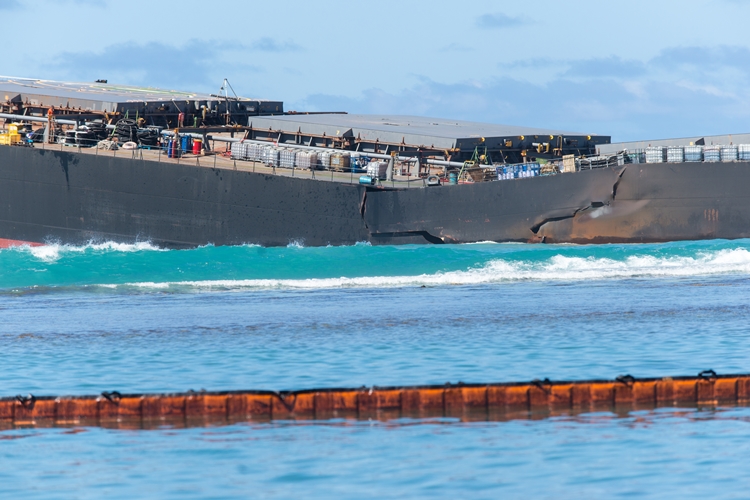 Clean-up operations have commenced in Pointe d’Esny in Mauritius after the massive collision involving MV Wakashio last July. Lianyungang Dali Underwater Engineering is engaged to dismantle the 75m vessel bow. The parts will be transported on a special barge to Port-Louis’ harbour before being handed over to a local scrap metal recycling specialist.

A massive operation involving multiple contractors
The oil spill reportedly amounted to $10b worth of damage. Clean-up operations are expected to conclude by end of March 2021, subject to weather conditions. Apart from Lianyungang Dali Underwater Engineering’s involvement, Hong Bang 6, a specialised crane barge is deployed to remove the stern. This barge is one of three of its kind worldwide.

The barge recently arrived in Mauritius along with the Xin Guang Ha, a semi-submersible heavy-lift ship operated by COSCO Shipping. The dismantled parts will be sent to Port Louis for a depollution exercise and to be cut into smaller pieces. Samlo, a specialist in recycling scrap metal will receive the dismantled parts for processing.

Although the risk of pollution is considered to be low, the Greek firm Polyeco has lined up a skimmer boat on site while anti-pollution booms have been installed around the neighbouring Blue Bay Marine Park – a designated Ramsar site. Sudheer Maudhoo, Minister of Blue Economy, Marine Resources, Fisheries and Shipping visited the site. He announced that the Mauritian authorities have decided to place anti-pollution booms in two specific sites on Mauritius’ south coast to prevent the recurrence of such an accident.

Revealing investigations
With the wreck removal in progress, the Court of Investigation continues to hear witnesses. First officer Subodha Janendra Tilakaratna attributed the accident to captain Sunil Kumar Nandeshwar’s prior directive to move closer to the Mauritian coast.

Tilakaratna admitted his earlier inaccurate statement about bad weather, adding he did not hear warning calls from the coastguard alerting the vessel was dangerously close to shore. He also claimed the captain was watching television when the alarms went off to indicate that the ship was no longer in deep waters. The captain in his statement argued that the first officer did not comply with the former’s instructions, while admitting his consumption of alcohol prior to the accident.

Probability of accidents is higher with compromised focus and discipline at sea. Shipowners can look to Marine Online’s extensive network of training providers to for their seafarers to be updated of the latest best practices and certifications.