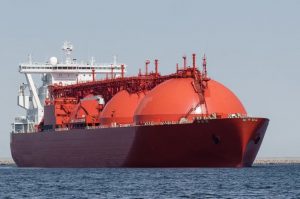 China has reached its LNG supply quota, leaving its top importer spot to Europe as the main buyer for US’ LNG. Some two-thirds of reportedly went to Europe last month, compared to around 61 per cent in December 2021 – when sky-high European prices and demand drove US LNG exports to a record.

A shift in demand
LNG in Europe last month traded at about US$30 per million British thermal units (mmBtu) amidst concerns that cheaper Russian gas supplies were failing to keep up with demand in a standoff over Ukraine. As at first week of February 2022, Rystad Energy reported the European LNG benchmark traded on the Dutch exchange cooled, falling to US$27.59 per mmBtu, below the Japan Korea Marker (JKM) price for Asia spot gas at US$29.12 per mmBtu.

Jason Feer, Global Head of Business Intelligence at LNG consultancy and shipbroker Poten & Partners noted the shift signifying Asia’s sufficient inventory. “It sends a signal Asia had full tanks and was not expecting to be big buyers,” he said. Refinitiv’s preliminary data showed total US LNG exports to all destinations were 7.3 million tonnes per annum (mtpa), up from a record 7.14 mpta in December 2021. The total includes 13 LNG tankers that have not signalled a destination.

Warmer than expected temperatures in Asia, plus healthy stockpiles last month helped swing LNG cargoes to Europe. A big illustration of it is China’s Unipec, the trading arm of state-owned crude oil and natural gas company, Sinopec Corporation offered to sell up to 45 cargoes of LNG for deliveries this year. Refinitiv noted around 13 per cent of US LNG shipments went to Asia in January 2022, down from about 25 per cent in December 2021. Shipments to Latin America accounted for about 9 per cent of January’s volume.

However, Ross Wyeno, S&P Global Platts’ analyst alerted of a possible cooling off in Europe as winter slowly ends. “We might see prices ease into the spring. The Ukraine crisis however, poses a risk for global gas markets with a potential cut off of Russian supplies to Europe. Nonetheless, the prospect of Russia cutting off all pipeline gas supplies to Europe is a highly unlikely scenario.”