Ever Given held hostage an ethics issue now? 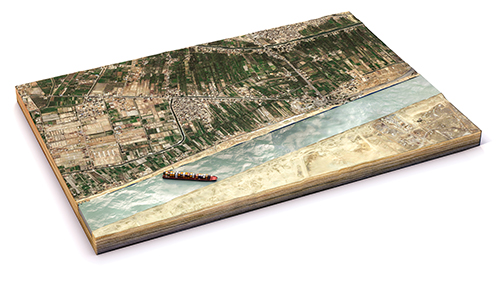 1.5 months after the incident, Ever Given and her crew are still in Great Bitter Lakes

We have seen the Suez Canal Authority (SCA) make numerous attempts to cajole some payment from the UK Club. First, it released two crew members on special circumstances, followed by another three. Subsequently, it offered another 30 per cent rebate on the original US$900 million claim for salvage bonus and loss of reputation. To date, there are no movements.

Poorly thrown dice
The current 400m long Ever Given is now taunted and likened to the Yellow Fleet trapped at the Canal in the 1970s due to war. While war was a warranted reason to not move to avoid shelling, the biggest concern now is over a claim that would determine the ship’s fate – either continue being withheld or auctioned off if the claim remains unpaid.

SCA Chief Lt. Gen Osama Rabie’s words did not add any weight to the matter. By claiming the authority is adhering to all protocols with hopes to settle the issue amicably is not going to cut it. It has yet to respond to the UK Club’s questions about the massive amount. The latter claimed SCA failed to provide a detailed justification for the extraordinarily large claim, which included a US$300 million claim for a “salvage bonus” and a US$300 million claim for “loss of reputation”. Additionally, SCA’s claim excluded the professional salvor’s claim for their salvage services which owners and their hull underwriters expect to receive separately.

In 2015, Egypt opened a major expansion of the Suez Canal, which deepened the main waterway and provided ships with a 35km channel parallel to it. The $8.5 billion project did not include the spot where Ever Given was stranded at. By insisting the ship owner holds full responsibility of the incident, one’s suspicions of SCA’s intentions can only deepen.

A question of ethics
The Suez Canal’s position as the shortest route between Europe and Asia does not warrant inaction pertaining to potential risks when ships navigate through it. Though it is not unreasonable to expect highly-skilled captains to pilot the vessel through it, there is an obvious shared responsibility between the SCA and vessels. The SCA instead continued to operate and take its chances. It took six years and a ship’s wedging stopping traffic for a week to drive the point home that the operation should have been more thorough.

Years of inadequate infrastructure and support only intensified the possibilities of such incidences. Knowing the canal as one of the country’s key source of revenue, more efforts should have been taken to facilitate smooth traffic and minimise incidents. The wait is almost indefinite given the current situation of UK Club’s questioning of Egypt’s claims.

Meanwhile, both cargo owners and charterers are under intense pressure to mitigate losses and world supply shortage, resulting in inflation. It leaves one to imagine what would happen to the cargo stuck onboard if the ship is ruled to be auctioned. Should the market be judgmental? If so, should it be towards the authorities?