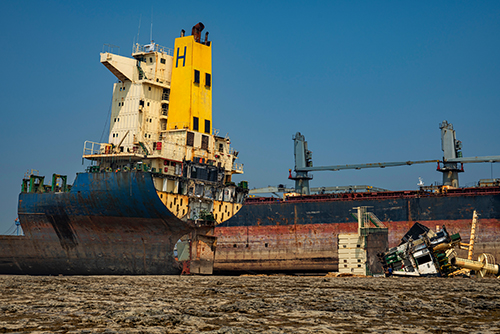 When a vessel’s time is up after 30 years, it makes its way to the scrapyard. Three countries are known to be scrapping hotbeds, while others are for newbuildings. The common denominator is low costs, and maybe lax rules.

The tricky thing about cost
Regardless which flag the vessel is registered under, once it is due to disposing, cost is the top concern for shipowners. Research showed business owners from wealthy nations including that of the European Union control the majority of world cargo and tanker fleet. However, maritime data showed between 2014 and 2018, 80 per cent of the fleet were sent to Bangladesh, India and Pakistan for demolishing. The most common rationales were weak regulations involving the environment, labour and safety.

European Union-flagged vessels have a list of approved yards for scrapping. Many shipowners hence opted to register their flags outside of the European Union for cost reasons. Countries are responsible for enforcing their maritime regulations including international and regional safety, and that of the environment. Unfortunately, a study found between 2002 and 2019, European-owned ships registered in low-income countries doubled to 96 per cent from 46 per cent.

Health takes a backseat
Dr Zheng Wan, a transport researcher based at the Shanghai Maritime University in China led a study which revealed existing global treaties were ineffective in curbing environmental hazards. The treaties include the 1992 Basel Convention to prevent transfer of hazardous waste from developed to less developed countries, and the 2009 Hong Kong Convention for the safe and environmentally-sound recycling of ships.

He noted fatal health risks and environmental hazards were overlooked in preference to cost savings. Dr Zheng estimated 5,000 workers in India’s scrap yards would perish by 2027 from inhaling asbestos and exposure to toxic substances such as mercury, lead, asbestos and even pesticides released into the soil and sea. Prof John Cheerie, from the UK’s Institute of Occupational Medicine in Edinburgh, added: “It is immoral if shipowners in wealthy developed countries are circumventing international conventions and potentially exposing workers in low-income countries to serious harm.”