From rope knots to sensors 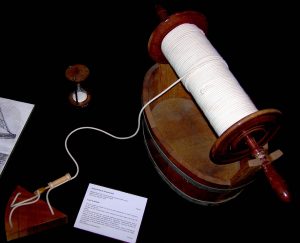 In the late 16th century, seafarers used to use a Chip Log to measure the speed of their vessels. Today, maritime speed is determined by ultrasonic sensors or Doppler measurement. This piece chronicles the evolution of maritime speed measurement.

Chip log and sandglass
This ancient yet accurate method involved tying knots at uniform intervals on a rope 14.4m apart. On one end of the rope is a piece of pie-shaped wood (known as chip) to serve as the starting point (for measurement) hurled into the water. Its 3 corners are secured to maintain stationary through underwater resistance. The log is the other roller-like device with rope wound and positioned at the stern (back-end) of the vessel. The last required item is the 30-seconds sandglass as the timer.

As the vessel starts moving when the sandglass is turned upside-down, the log will spin and release the rope. At the end of the 30 seconds, the number of knots that went into the water will be counted. A knot came to mean one nautical mile per hour. Therefore, a ship traveling at 15 knots could go 15 nautical miles per hour. Converting that to metrics translates to 1.8km/h.

An article by Massachusetts Institute of Technology (MIT)’s School of Engineering wrote that maritime speed today is determined by ultrasonic sensors or Doppler measurement, and the 30-second divisor in the rate equation has been replaced by 28. The instrument for measuring a vessel’s speed is still called a log, and marine and aeronautical distances are still measured in nautical miles.

Camila Caballero, MIT’s senior and academic coordinator for Amphibious Achievement said, “Maps used at sea and in the air are based on the earth’s circumference. Their scale varies with latitude, and the nautical mile, about 500 feet longer than the land mile, reconciles those differences.” Lastly, in both today’s pilothouse and cockpit, the speed equivalent to one nautical mile an hour is still called a knot, which echoes those days when seafarers got creative with a few simple materials, yet produced an essential and significant little gadget.