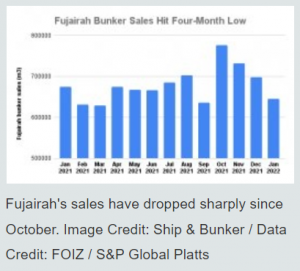 Repost: Bunker sales at the Middle Eastern hub of Fujairah dropped to the lowest level in four months in January, falling on both a yearly and monthly basis.

Total sales excluding marine lubricants sank to 646,089 m3 in January, according to the latest data from the Fujairah Oil Industry Zone and price reporting agency S&P Global Platts. The total was down by 4.3% on the year, by 7.4% from December’s level and the lowest monthly total since September.

Singapore’s marine fuel sales dropped by 10.4% on the year in January, while Panama’s gained 9.2%.