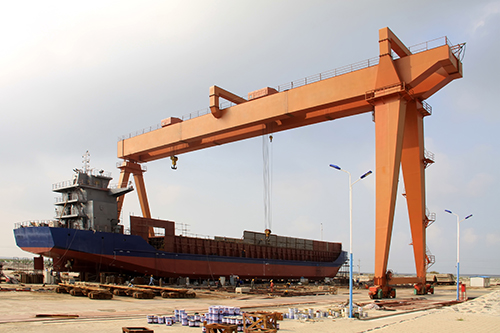 China experiencing a ship order spike, thanks to a formidable edge.

A media report early May quoted findings from the Ministry of Industry and Information Technology (MIIT), which revealed completion volume of shipbuilding in China. It raised 39.8 per cent annually to 9.79 million dwt in the first three months, accounted for 43.4 per cent of the global market share.

The real triumph card
China’s rise in maritime is largely supported by state funding since the 2000s. After a fatal setback in the 2008 financial crisis, state support boosted Chinese companies’ global market share in shipbuilding and finance by 10 and 15 per cent between 2008 and 2018.

In 2020, China’s newbuildings orderbook surpassed South Korea’s. The MIIT cited three major indicators that resulted in the stellar performance: completed ships, new and existing orders. These three were leading with 43.1 per cent, 48.8 per cent and 44.7 per cent respectively globally. Trailing behind are South Korea and Japan – with 41.4 per cent and 7 per cent respectively for global newbuilding orders in 2020.

So why China? The fact these shipyards are supported by the state translates to more economical costs for newbuildings. With strong subsidies from the state, companies can offset costs and boost revenue, and enjoy tax and levy rebates. These companies can even purchase technology which are commercially unprofitable, covering production costs and enhance research and development. At the same time, companies can promote local goods and boost domestic market. The above-mentioned are just a couple of ways the state supports the Chinese shipyards.

This translates to the luxury of quoting severely competitive prices – since the shortfall can be compensated by the government. It is of no wonder, China shipyards are receiving orders in droves – even from Germany. However, the real reason is more.