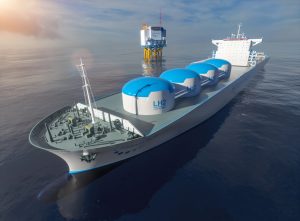 While hydrogen is a clean fuel, the risks outweighed the advantages especially on safety. Its composition is a cause for concern as it is highly flammable, which warrants extra care for storage. That translates to more costs for shipowners. However, it did not hinder Korea from taking the leap.

Net zero vessels by 2030
The industry may now be on the highway towards LNG and ammonia-fuelled vessels. However, Korea has gotten ambitious by teasing the market with hydrogen as the next generation of marine fuel this year. One mega builder, Korea Shipbuilding & Offshore Engineering (KSOE) is looking into hydrogen bunkering by 2025.

This move would imply KSOE are aware of the challenges involved in hydrogen-powered ships. One of the biggest issues is keeping the gas chilled at -253 °C just to maintain its liquid form, which requires high pressure storage comprising compressor units and high-strength steel tanks. These are space consuming and costly. Additionally, such temperatures subject other parts of the vessel at risks of cracking, leaving shipowners with more to worry about.

Yoo Byeong-yong, Vice President of KSOE’s Energy System Research Institute announced, “We have developed a concept ship with a capacity of 20,000 mᶟ. We foresee the global hydrogen market will grow rapidly after 2030 and demand for ships will heighten accordingly.”

Korea’s industry estimates projected some 20 vessels with 20,000 mᶟ capacities to be built in 2030, and may increase to 200 with 170,000 mᶟ after 2040. Should that come to pass, Korea will be a newbuilding powerhouse. Moreover, the republic had a head start in liquefied natural gas (LNG) and ammonia, leading in the net zero newbuilding-centred race. Yoo added that the early stages of ships’ transporting hydrogen would be fuelled by LNG. The vessels however could be powered by hydrogen once its market matures.