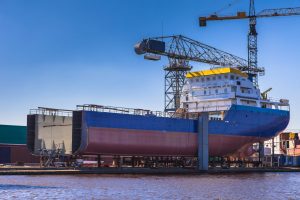 HHIH lost the opportunity to augment its shipbuilding business when the European Union (EU) rejected the merger with Daewoo Shipbuilding & Marine Engineering (DSME). However, it provided an opportunity (for HHIH) to embark in other businesses such as liquid hydrogen and autonomous vessels.

Relooking its shipbuilding plans
As at 7 February 2022, HHIH has already secured a total of KRW$3.7 billion (US$3 million) in orders for 34 vessels, meeting 21.2 per cent of its 2022 order target of KRW17.4 billion (US$14 million). The orders include 2 liquefied natural gas (LNG) powered roll-on/roll-off ships, 1 LNG bunkering vessel and 6 2,800 twenty-foot equivalent unit (TEU) container ships.

Han Young-soo, an analyst at Samsung Securities has been observing the movements. He remarked, “Early 2019 when HHIH announced it was going to acquire DSME, it was a time when shipbuilders struggled to secure orders and engaged in price wars. Currently all Korean builders have enough orders on hand amid growing prices. The shipbuilding market is entering the super cycle.” He added HHIH is in a good position to invest in new businesses.

Apart from a good start in the new year, the company has KRW1.5 trillion (US$1.2 billion) of funds for new investments. HHIH’s CEO, Chung Ki-sun laid out the company’s vision early January 2022 listing autonomous navigation, liquid hydrogen and robotics as the 3 key technologies to focus on.

However, a HHIH official said the firm is thoroughly reviewing the EU’s decision to decide on their next step such as where to invest with the cash. “We have proposed 3 new businesses that we will be focusing on and they are all very important. But in terms of this year, in line with our roadmap, we will be concentrating on autonomous navigation technology,” the official pointed out. The EU’s prior disapproval certainly offered HHIH a silver lining in 2022. If the acquisition proceeded, it would cost HHIH KRW6 trillion (US$5 billion).