In the name of Environment, Social and Governance 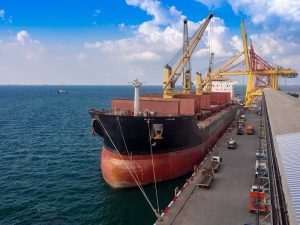 When major carriers and countries imposed self-sanctions, it was purely business. However, if one were to look closely at the principles of ESG, political contribution happens to be a component under Governance.

Is this a worthwhile move?
The world’s top carriers – Denmark’s Maersk, France’s CMA CGM and Swiss-based MSC have suspended their bookings to and from Russia. With these shipping heavyweights halting services, the massive disruption makes every stakeholder a collateral damage.

Delo Group, Russia’s largest port operator is bracing itself for a drastic throughput drop. Group CEO Dmitry Pankov said, “We expect the drop in shipments (to and from Russian ports) in the northwestern region to be around 90 to 95 per cent starting in May if no alternatives appear on the market.” The Group owns Global Ports, which operates terminals in northwestern Russia and in the Russian Far East, as well as terminals in the Black Sea port of Novorossiysk. It also controls TransContainer, the country’s largest freight container operator.

Alexander Isurin, Chief Executive of TransContainer, predicted the exit of container shipping companies would result in a shortage of containers in circulation on the Russian market. Isurin warned, “The market will need to find a replacement for some 300,000 twenty-foot equivalent units (TEU). The Russian transport market will most likely not be able to make up for everything and replace the largest container lines in the world that suddenly decided to no longer work here.” TransContainer expects about 30 per cent of containers on the Russian market to be withdrawn from circulation.

The carriers’ ESG efforts might be futile. Though they may have evaded political battles, they would have to contend with their clients who are forced to stop business with Russia. In the end, it may not be the Russians that would boycott the carriers but those who export to Russia. The supply shortage is a golden opportunity for many cargo owners to fill the gap. To have that revenue stream cut by a service provider will prove to be a wrong move that costs more in the long run.