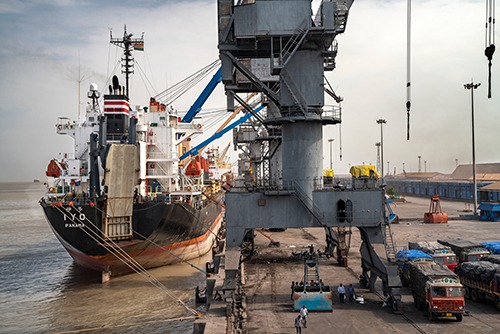 Repost: India is one of the biggest providers of seafarers for the shipping industry. But the nation’s COVID wave has sparked travel curbs and restrictions on Indian crews, sending shipping firms scrambling to find replacements.

Sheikh Karim, a seafarer in the eastern Indian state of Odisha, spends hours on his phone everyday, scrolling through overseas shipping jobs he can’t apply for.

Along with the Philippines and China, India is one of the largest suppliers of crew to the global shipping industry. But a huge surge of COVID-19 infections in the country and a shortage of vaccines have left ship workers like Karim high and dry.

Karim, who is a trained oiler, a junior worker who maintains and repairs ship engines and machinery, said he’s been trying repeatedly to find a slot on a designated government website for a COVID-19 vaccine in his home city of Balasore. But, so far, without luck.

“I don’t know when I’ll get the first dose of the vaccine. It’s frustrating because I see jobs advertised for cargo ships and tankers which pay in dollars,” the 27-year-old told DW, adding he desperately needs the income. “Living costs are rising and there are additional health care and hospital expenses for my family and relatives who are getting COVID.”

No vaccines for ‘essential workers’
It’s a situation familiar to thousands of seafarers across India who are unable to get out of the country. On the other hand, shipping authorities have also advised Indian crew currently at sea to “desist from signing off from the vessel” until the situation improves.

“The main issue is that seafarers have been designated as essential workers, both nationally and in several other countries, which means the government should be giving them vaccinations on priority,” said Abdulgani Serang, general secretary of the National Union of Seafarers in India. “But that is not happening in India.”

He said maritime authorities had set up dedicated vaccination facilities for seafarers in port hospitals in cities like Mumbai, Kolkata and Kochi. “But the main problem is that the vaccines are simply not available,” Serang said.

India’s estimated 240,000 seafarers are predominantly between the ages of 18 and 45, an age group that was supposed to receive Indian-made vaccines, Covishield and Covaxin, from May 1. But a shortage of stocks has forced authorities in many states to postpone the jabs.

“Unvaccinated Indian seafarers are now at a disadvantage compared to people of other nationalities who could fill their jobs, for example Indonesians or Chinese who have received priority vaccinations in their own countries,” Serang said. “There is no blanket ban on Indian crews. But ship owners are worried about taking them.”

Fears of fast-spreading COVID variant
Already, ports like the one in Singapore and Fujairah in the United Arab Emirates have barred ships from changing crew members who have recently traveled from India, making it difficult for seafarers to be relieved at the end of their contract periods.

According to reports, the Chinese port of Zhoushan has banned entry for any ships or crew that have visited India or Bangladesh, which has also struggled with a COVID surge in the past three months.

“There’s so much volatility and uncertainty. The rules are changing all the time,” said Rajesh Unni, founder and CEO of Singapore-based Synergy Group, a ship management company. “Most ship owners we talk to say it’s too much of a risk to do a crew change by sending people from India.”

His company has temporarily frozen all crew changes from India. Unni said seafarers coming from India were testing positive for COVID despite quarantine and testing negative before boarding. There are also fears about a more transmissible variant, the B.1.617, which is reported to be behind the acceleration of India’s explosive outbreak.

Earlier this month, health authorities in France identified the variant among sailors who were sick aboard an oil tanker, which had been to India. Too ill to pilot the vessel, it was dragged into the eastern port of Le Havre by tugboats. The men were put in isolation in a dedicated hotel.

Recently, South Africa’s port authority said 14 Filipino crew members aboard a cargo ship from India to Durban were quarantined after they tested positive for COVID. The ship’s chief engineer died of a heart attack.

“The challenge is that tests are unreliable, and the variant is more deadly and spreads like wildfire. It can infect the whole ship, basically immobilizing the vessel,” Unni said.

Replacing Indian crews not easy
With a growing number of seaports and airports closing their doors to seafarers to and from India, shipping companies say it’s leading to bottlenecks in crew changes. Several companies are temporarily tapping seafarers from other nations to replace Indians scheduled to board ships.

Carl Schou, chief executive of Wilhelmsen, a Norwegian-owned crew provider, said the group sources 15% of its approximately 10,000 workers from India, mainly officers. The company stopped crew changes in India from April 24 until at least the end of May and is looking at other nationalities to plug the gaps.

“But it’s not as easy as it sounds. Certain segments such as gas and oil tankers have very specific requirements as to competence and levels of experience,” Schou said. “Most of our pool of well qualified people come from India. So, all of a sudden, we’ve lost our most important source of officers. Going into our wider network and finding the right crew that matches the exact criteria is quite a problem.”

Seafarers stuck at sea again?
Despite the disruption sparked by the health emergency in India, few think it will have any immediate impact on the movement of merchant ships which transport about 90% of global trade.

“The vessels are not stopping because of problems with crew changes. A few ships could be delayed, but it won’t have an impact on the network or the supply chain,” Adhish Alawani, a spokesman for Maersk, the world’s largest container shipping company, which has a pool of 4,000 seafarers from India.

“The worry is that this is more of a human crisis where we could once again see seafarers staying on board for a much longer period than their contract is for because they can’t come ashore and fly home,” he said.

Shipping executives say the only way out of the situation is for seafarers to be prioritized in the global vaccination rollout.

“Worldwide, there’s about 1.6 million seafarers and that’s maybe one production day for one of these vaccine makers,” Schou said. “Just one day and you’ve covered all the seafarers who are so important for global trade and to keep the world going.”

Share
Previous Ever Given held hostage an ethics issue now?
Next Will COVID-19’s devastation in India reset the country’s maritime sector?