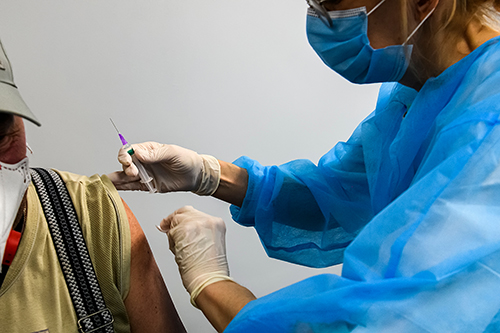 Gradual recovery in maritime expected
The hot-button issue is the sidelining of Indian seafarers because of vaccine shortages. Though it is not mandated, employers prefer vaccinated crew. This led to a big surge in other nationalities such as the Bangladeshis and Indonesians, even Chinese nationals! Fanning the flames were borders slamming shut on Indians and any vehicles which passed the country – further hindering access to vaccines and worsening the outbreaks detected onboard.

To date, only employers offered Indian seafarers vaccines onboard. V. Group notably confirmed its crew (including 13 Indian seafarers) onboard their vessel, Cabrera received the single-dosed vaccine. In a statement, Franck Kayser, Dania Ship Management Managing Director, commented: ‘’We are grateful to the USA and in particular to the Port Everglades Authorities, for identifying the necessity for seafarers to be vaccinated.’’ Dania Ship Management is a subsidiary of V. Group.

If V. Group’s role was to nudge the Indian government to do something for its seafarers, the company succeeded. But, apart from that, the government should feel driven towards the long overdue initiative for the sake of public health and international trade.

Mansukh Mandaviya, Minister for India’s ports, shipping and waterways, revealed six major ports had started vaccination centres, namely: Mumbai, Cochin, Chennai, Visakhapatnam, Kolkata and Tuticorin. The ministry has also discussed with state governments to ensure seafarers are included on their priority lists for jabs, with Kerala, Tamil Nadu and Goa all agreeing so far. Icing to the cake is shipping companies in India have also started their vaccination programmes for seafarers.

That places the industry in a good position to welcome Indian seafarers back at sea, not to mention an abundance of candidates actively looking for assignments. Marine Online is one of the most popular sources where shipowners, manning agencies and even operators can find their candidates.

Share
Previous There are still takers for Venezuelan oil
Next Is COVID-19 officially classified under force majeure now?