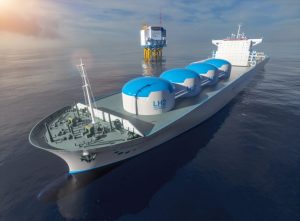 CO2 is scoffed at in the industry, and condemned by activists as the culprit behind our climate crisis. Even with hydrogen touted as one of the alternative marine fuels, experts remained unconvinced of its advantages – given it is produced from coal or natural gas.

CO2 significantly reduced (or not)?
A Swedish vessel architect recently “turned the tables” with a new tanker design that reduces emissions. FKAB Marine Design’s concept received an Approval in Principle (AiP) from RINA, an international classification society. An interesting component within is combining liquefied natural gas (LNG) with steam in a gas reformer to split LNG molecules into hydrogen and CO2.

The design received tremendous support from RINA. Antonios Trakakis, Greece Marine Technical Director from RINA said, “To meet CO2 reduction targets, shipping is faced with the challenge of having solutions which rely on fossil fuels, and still require technology to mature. Its availability is also far from being guaranteed. This new design enables the use of hydrogen as a fuel today without the need for bunkering and storage onboard, and exceeds IMO 2050 targets of 70 per cent greenhouse gas reduction.”

Hydrogen is directly used for internal combustion engines and fuel cells in a hybrid marine power system. The CO2 is captured by splitting the LNG molecules, rather than from exhaust gas, thus reducing emissions. However, there is a dilemmatic part to this. Hydrogen is produced through energy-intensive processes, more importantly from fossil fuels like coal.

The flip side to this is there is another way to produce hydrogen – water electrolysis. Called the Green Hydrogen, it is produced with renewable energy – rendering it as derived from a clean source, albeit an expensive method. Back to the production quandary, there is a remedy to address the emissions – called the carbon capture and storage (CCS). Surprisingly, FKAB Marine’s concept incorporated CCS in its design.

Nonetheless, skeptics will be skeptics. The CCS has received neither endorsement nor approval from any agency; at the bare minimum the Intergovernmental Panel on Climate Change (IPCC). With hydrogen powered vessel development still in nascent stages, costs would still be a major consideration. To expect an untainted production process would be far-fetched.