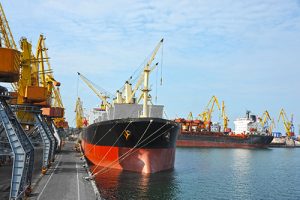 A period of high chartering rates put cargo owners off. However, the current fallout resulting in numerous sanctions which applied to many types of cargo turned out to be in shippers’ favour. It is now cargo owners’ turn to be selective of charterers.

Tides may have turned
Commodities have experienced a drastic shift in pricing as a result of the Russian-Ukraine crisis. Last few days, oil remained exempted from the sanctions and the Port of Rotterdam continued without disruptions. Despite Russia accounting for about 10 per cent of global oil supplies, some traders have begun to get apprehensive about dealing with oil for fear the sanction hits. Edward Meir, ED&F Man Capital Markets’ analyst said, “Oil has been pushing higher on growing perceptions that Russian oil is unable to be transacted. Although oil is not technically under sanction, traders are understandably nervous about taking delivery of Russian crude, let alone storing, shipping and ultimately selling it.”

Brent crude futures reached US$113.94 a barrel, the highest since June 2014, a gain of more than 40 per cent to date this year. A source disclosed to Reuters that 2 crude tankers due to load Russian Urals and Kazakh CPC blend this week have been cancelled. Malaysian palm oil futures rose past RM7,000 a tonne, hitting a record high, on the prospect of rising demand with the closure of Ukrainian ports.

Dry bulk is showing bullish signs as observed by ING. “Global buyers of grains have been increasingly turning to the US, Europe or South America to secure supplies in the immediate term. Moreover, demand for stockpiling has also increased due to current uncertainty.” the analyst said. Russia and Ukraine account for about 29 per cent of wheat exports. Wheat prices hit US$10.59 a bushel, the highest since March 2008. Corn prices rose to US$7.47-3/4 a bushel, the highest since December 2012.

European coal prices for 2023 rose to a record US$260.50 a tonne on fears of shortages in the continent, which relies on Russian coal. Newcastle coal futures hit a record US$400 a tonne as buyers scrambled to find alternatives to replace Russia, the third largest exporter after Indonesia and Australia. With a hike in cargo supply, charterers and shipowners may need to exercise tact now if they have previously ruffled cargo owners’ feathers on the pretext of insufficient space.