Japan to ramp up steel production in Q1 2022 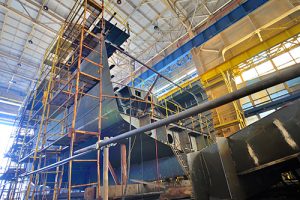 Japan’s crude steel output is expected to rise 1.9 per cent in the January-March quarter from 2020, assisted by a recovery in manufacturing including shipbuilding and machinery. This projection was disclosed by the Ministry of Economy, Trade and Industry (METI).

Shipbuilding remains protected
This would mark the fourth straight quarterly increase and bring annual output for the financial year to 31 March 2022 to 97.07 million tonnes, up 17 per cent from 2020 when the pandemic suppressed production to its lowest in 50 years. METI estimated crude steel output at 24.15 million tonnes for Q1 2022, up from 21.34 million tonnes a year earlier. This suggested a demand pick-up in the automotive sector, where production was prior affected by chip and parts shortages. Carmakers such as Toyota and Nissan had cut production since summer.

Daisuke Matsuno, Director at the METI’s metal industries division said “Our forecast is based on an assumption automakers will boost output to recover a loss from the recent months.” Matsuno however cautioned of a risk in the event car production rate deviates from original plans. Toyota announced it would suspend production at five domestic factories in January due to supply chain issues, chip shortages and the pandemic.

Despite a steady recovery in crude steel production, the estimated annual output in the world’s number 3 producer will fall short of the pre-pandemic level at 98.43 million tonnes. Matsuno attributed the decline to a myriad of reasons, including reduced automobile production and steel output. Nippon Steel reportedly shut a blast furnace in Kure, Western Japan, last September as part of its restructuring plan. That shut down cut nearly 10 per cent of its production capacity as a result of shrinking domestic demand and fierce global competition.

It is thus clear as day Japan’s shipbuilding sector remains “protected” from market impacts, as the country had no qualms about other sectors’ reducing production. Based on Matsuno’s words, shipbuilders can heave a sigh of relief that production can go as planned. Last month, Japan’s Nippon Shipyard (NSY) announced it would develop ammonia-powered ships. It planned to create ammonia-powered home-waters liners by 2024 and large ammonia-powered carriers by 2026.

Share
Previous Singapore will soon be in ammonia bunkering business
Next Will the industry witness real movements towards net zero in 2022?