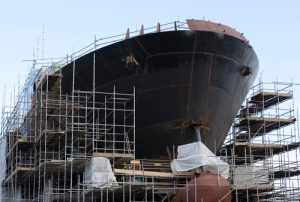 While the republic scored well in acquiring newbuilding orders, it has a manpower crunch to deal with

Korea announced it is welcoming foreigners to the shipyards to fill the labour shortfall. The country has been in an intense shipbuilding race with formidable China. If Korea fails in its mission to gather enough labour to commence work, conceding defeat will be inevitable.

Shipbuilders’ crises
Korea was originally in good stead when it leaped into liquefied natural gas (LNG) vessel building – underscored by market demands when decarbonisation became a pressing issue. It started off well by securing a good collection of orders so much that it overtaken its Chinese rival. However, things to a turn for the worse when the shipyards faced a severe manpower deficiency – attributed to the unattractiveness of the job nature which caused the industry to have trouble commencing work.

Apart from the futile efforts to revive its shipbuilding sector by reducing work hours, it could not beat the other sectors such as semiconductors, internet services and video games which fetched higher income. Shipbuilders’ cash flow was also a major contributor to the crunch given their orders are very much self-funded during the initial building stages. They will only be paid towards the end of the project, resulting in builders unable to afford raises. Nikkei quoted one industry group’s findings which revealed that number of workers in the industry plunged from about 200,000 in 2014 to around 90,000 in 2021.

Calculating the odds
The country houses 3 mammoth shipbuilders: Hyundai Heavy Industries (HHIH), Samsung Heavy Industries (SHI) and Daewoo Shipbuilding & Marine Engineering (DSME), ranked second, third and fourth in the world respectively. Orders doubled worldwide in 2021 compared with 2020, according to Clarksons Research. It reached an 8-year high of US$43.9 billion, industry ministry data showed — up 2.3-fold from 2020 and a 93 per cent increase from 2019, before the pandemic. Korea controls some 90 per cent of the LNG tanker market. 37 vessels were ordered in Q1 2022, equivalent to half the full-year total for 2021, leaving the yards full until 2024.

Korea may stand a chance in making up for lost time with workers from Southeast Asian nations including Vietnam, Thailand and the Philippines. A shipbuilder disclosed they are unable to handle the order hike with the current staff strength. Hence, they hope the foreigners can address the labour shortage.