Mammoth jam on all counts 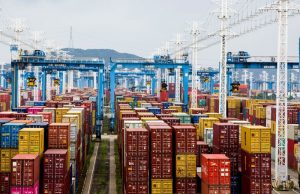 Last year was horrendous for ports of Los Angeles and Long Beach, where a good fleet of 73 vessels were waiting to enter – as per Marine Exchange of Southern California. That episode was recorded as a maritime traffic jam in United States’ busiest ports. China’s case on the other hand, is a whole new level.

Re-evaluate the policy
Bloomberg earlier reported 477 bulk cargo ships were waiting to deliver resources from metal ore to grain into the country. Queues of vessels carrying raw materials have jumped after Shanghai initiated a city-wide lockdown at the end of last month to combat COVID-19. This time, Windward’s Maritime A.I platform data computed there were 506 and 470 vessels, respectively in the April and March stuck outside of Chinese ports. It was only 260 in February 2022.

Maersk stopped accepting bookings for reefer and dangerous goods into Shanghai on 14 April 2022 due to a lack of yard space. To be precise, the reason was the ports had insufficient electric plug slots to keep refrigerated containers cool, while trucking remains limited and terminals are congested.

One knows it is a huge issue when Japan’s Consul General to Shanghai, Shuichi Akamatsu, sends a rhetorical request to Shanghai’s Vice Mayor through the consulate’s website urging the Shanghai authorities to address concerns over business disruptions. He acknowledged city’s efforts to curb the virus. “However, with the extension of virus control measures, the situation of production and operations not being able to function normally has already lasted for more than a month. The impact on business activities is clearly becoming more severe by the day,” he wrote.

At this juncture, it is apparent China has not many options to consider if it gets its priorities right. When a foreign government official intervenes for an intervention, the severity can no longer downplayed on the pretext of public health interests.