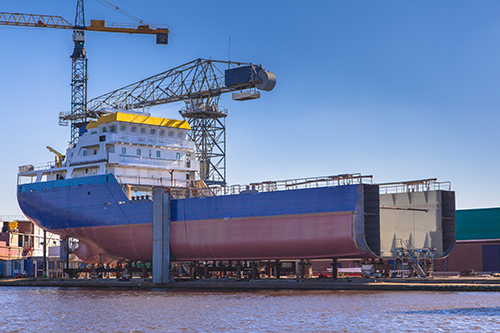 Is it too early to toy with newbuildings now?

Despite China enjoying a current spike in new orders from its competitive pricing, the type of engines is now an enormous guessing game. Even the largest shipping company in the industry is holding their horses on the types of engines to expand their fleet with when the time comes.

Newbuildings vs retrofits
The average timeline to complete building a ship is approximately three years. It however does not necessarily spell optimism with the current worldwide trade crisis. Therefore, is now a good time to invest in newbuildings? A.P. Møller – Mærsk A/S’ CEO, Søren Skou, noted: “There are marketed engines in the world that run on methanol and alcohol, and ammonia engines are under development. I am sure they will be more expensive than what we do today. We are not expecting a huge capex coming to us because of engine technologies; if we end up where we think will be – ammonia, methanol or similar used as a future fuel.” Mærsk consumed a record 10.3 million mt of fuel in 2020 alone.

Heavy fuel oil (HFO) is the most widely used type of fuel for commercial vessels. Combine that with the current market sentiments, it may not be a wise move to jump into the LNG bandwagon as yet. Even if it is to be IMO 2050, it is still too early to replace the fleet now. Noting that, it is a more realistic approach to invest in second-hand vessels to meet the overwhelming quantity of cargo waiting to be shipped than getting ready for IMO 2050. Though the IMO’s environmental target to reduce shipping’s carbon emission by minimum 50 per cent is important, the current market climate unfortunately is not conducive for such investments.

If Mærsk is prepared to place its first order of carbon-neutral ships only in 2023, it is financially-sensible to follow the leader now than to venture into murky waters. Marine Online is an extensive source of vessels with various makes for purchase. Shipowners are also using Marine Online’s platform to source for buyers actively finding suitable vessels for their business needs.

Share
Previous It’s time for the charade to stop
Next Will Suez Canal’s value sink further?