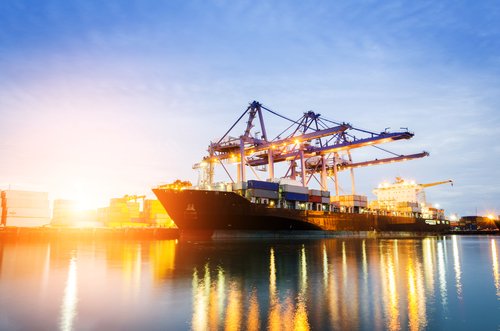 French shipowner, CMA CGM, declared its decision to stop further increases in spot freight rates for all services until 1 February 2022. The company cited client relationship takes precedence over revenue. Shortly after, German player Hapag-Lloyd declared the same decision, albeit no word on the expiry of this new cap.

Hapag-Lloyd peculiarly did not announce this on their website, unlike their French competitor. What thickened the plot was Hapag-Lloyd’s silence when the media requested for comment. Hapag-Lloyd’s Chief Executive Rolf Habben Jansen ruled out price controls in August 2021 due to off-the-charts demands for space. However, the spot rates’ capping was just attributed to the increasing pressures from cargo owners and regulators who saw carriers clock skyrocketing profits.

The degree of strained client relations and hordes of complaints surrounding big carriers provided incriminating skepticism. On the question of if this move will help shipowners successfully salvage tense relationships with clients is anybody’s guess. Shippers at large are also skeptical about the latest scoop from Hapag-Lloyd.

Even the Global Shippers’ Forum did not hold back in its skeptic sarcasm about Hapag-Lloyd’s latest move. James Hookham, director of the forum, remarked: “It is like the torturer asking the prisoner ‘aren’t you grateful I am not turning the screw on the rack any further?’” His quip came concerning cargo owners’ potential insolvencies due to low-priced contracts signed early this year. Combine that with the pressure of heightened rates will lead to cargo owners suffering penalties.

Another to discount the shipowners’ sincerity was the European Shippers’ Council, which believed it was a move to gradually corner cargo owners into a position of lengthy contracts at higher rates. Policy manager Jordi Espin questioned: “How will they treat contract rates in the future? When we discuss contracts with the carriers, they want to talk about ammonia and higher costs. Where were they when we wanted to discuss the impact on the market from the Suez blockage or the COVID-19 outbreak at Ningbo? They hid behind their website, there were no customer relations people to speak with!” There are now four shipowners (left) who have not responded to the current saga.