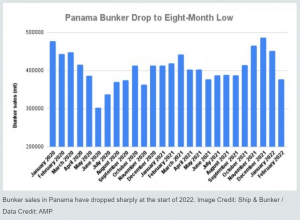 Repost: Bunker sales in Panama dropped to the lowest level in eight months in February, falling on both a monthly and yearly basis.

Total sales sank to 377,649 mt in February, according to preliminary data from the Panama Maritime Authority (AMP). The total was down by 9.7% from a year earlier and by 16.4% from Panama’s fall follows a similar drop in Singapore last month. Bunker demand at the world’s largest bunkering hub sank to 3.5 million mt in February from 4 million mt in January.