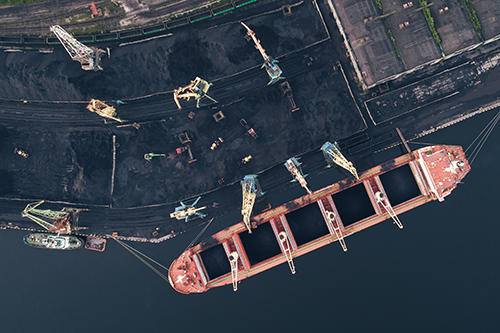 Capesize and panamax vessels are heavily deployed to address the blackouts

The Baltic Exchange’s main dry bulk sea freight index soared to its highest in 13 years as at 29 September 2021 for all vessels, with the capesize segment leading. Though sources have quoted rates with up to US$5,000 difference, the common denominator is increased demand.

Lethal ripples of power outage
Electricity is tightly curbed in Chinese provinces from the country’s vow to reduce carbon emissions. China’s construction sector might be licking its wounds from Evergrande’s opaque fate. That of other markets are equally clear as mud given the forced manufacturing halt. Nikkei reported the world’s biggest iPhone assembler has halted production at its Kunshan facility in Jiangsu Province due to lack of power supply. The media added that Unimicron Technology (another Apple supplier) also halted production in Kunshan citing regulatory filings.

Since its dispute with Australia, China has turned to India for coal and the latter is at risk of shortages as well. Indonesia and Russia would subsequently make up the shortfall, albeit at a premium. That essentially propelled the capesize spot rates to US$69,000/day on 28 September 2021, and panamax spot rates to US$36,200/day, according to Clarksons Research’s data.

However, the Baltic Exchange quoted average daily earnings for capesize vessels rose to US$74,786, while the same for panamax vessels peaked at US$36,335. Despite the differences in rates, the common denominator is the panic buy to generate electricity.

When will iron ore rebound?
China has a huge order of newbuildings to deliver — exerting further pressure on coal supply and steel prices. As the year end inches closer, China may need to ration its coal supplies. Clarksons Platou Securities’ analyst, Omar Nokta warned, “We have a situation where iron ore demand dips and results in a handoff to thermal coal. However, when thermal coal demand diminishes after winter, the iron ore market may return.” The next question is: how would the republic apportion its coal imports between the shipbuilding sector and power plants? It would be a huge decision for the government to make.