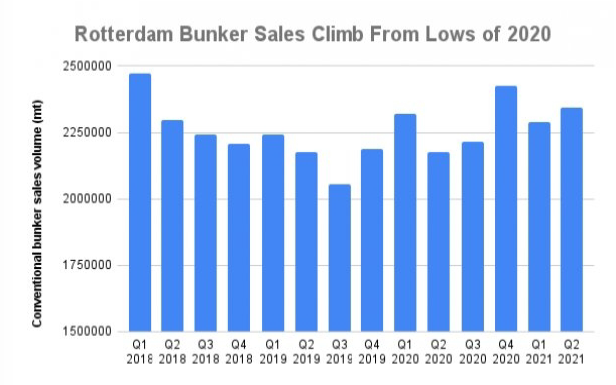 Repost: Marine fuel sales at Rotterdam, the world’s second-largest marine fuels hub, climbed on both a quarterly and yearly basis in the second quarter.

Total conventional bunker sales reached 2.3 million mt in the first quarter, according to new Port of Rotterdam data released on Tuesday, up by 7.7% from the same period a year earlier and by 2.3% from the first quarter of this year.

Bunker data across leading hubs from the second quarter is shaping up to show a reasonably healthy recovery from the lows of the COVID-19 pandemic. Singapore‘s second-quarter volumes were 4.8% higher than those a year ago, while Panama‘s were 9.7% higher.

Biofuel sales — first noted in the data for the first quarter of this year — were also on the rise overall. Bio-fuel oil sales lost 20.3% from the first quarter to 39,129 mt, while bio-distillates almost quadrupled to 12,110 m3. This is the total volume of biofuel blends containing conventional bunkers as well, with an unknown quantity of biofuel in each blend.

The port also published methanol sales for the first time, noting 250 mt of sales in the second quarter. This was from Waterfront Shipping‘s demonstration of methanol bunkering at the Dutch hub in May, a port authority representative told Ship & Bunker on Tuesday.