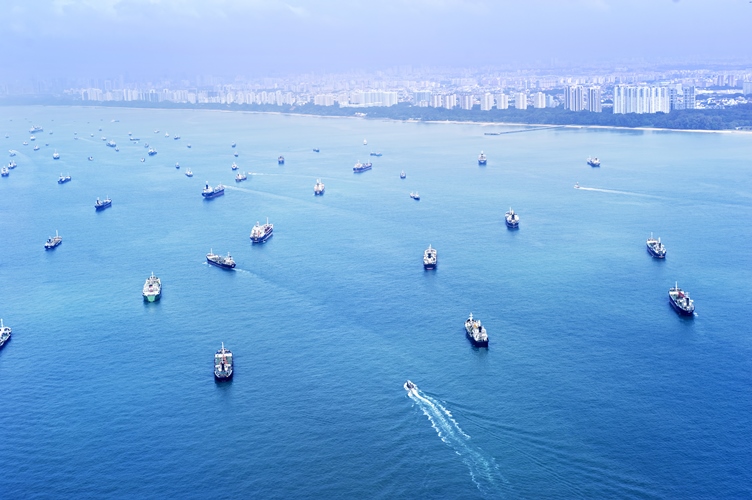 Repost: Bunker sales in Singapore, the world’s largest marine fuels hub, started 2021 with only a marginal decline from the artificially high level seen a year earlier at the start of the IMO 2020 transition.

The city-state’s total sales reached 4.51 million mt in January, according to preliminary data from the Maritime and Port Authority (MPA), slipping by just 0.3% from the level seen in January 2020.

The decline will reflect the artifcially high level of demand at the start of 2020 when shipping companies were stockpiling the new VLSFO blends just after switching to them on concern over potential availability problems.

The sales total in January 2020 was the highest since January 2018, up by 7.5% from the same time a year earlier, and was not beaten for the rest of 2020. The mandatory mass flow meters used to measure all bunker deliveries in Singapore come with a +/-0.5% margin of error, while remaining more accurate than traditional measurement systems used at most other ports.

Only licensed companies can supply bunkers in Singapore, and the MPA calculates sales based on the bunker delivery notes of those companies. 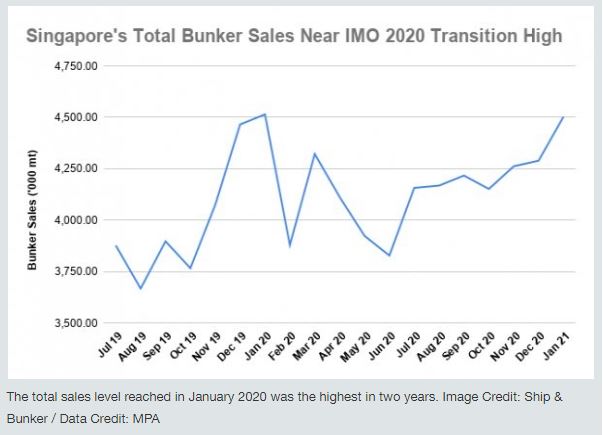 Demand Flows to Bunker Hubs
Singapore’s sales have benefited from a consolidation of bunker demand at the world’s largest hubs during the IMO 2020 transition and the uncertainty of the COVID-19 pandemic.

Singapore’s rise last year– gaining by 5%, its biggest yearly advance since 2016– compared with a rise measured in metric tonnes of 2.8% at Rotterdam, and a drop of 11.4% for Panama. Volumes at some ports were reported to be down by as much as 75% at some points in 2020.

Bulker, Container Visits Down
The number of ships calling at Singapore for bunkers in January was little changed on the year at 3,593 vessels. That left the average stem size slightly down in January, falling by 0.3% to 1,253 mt. 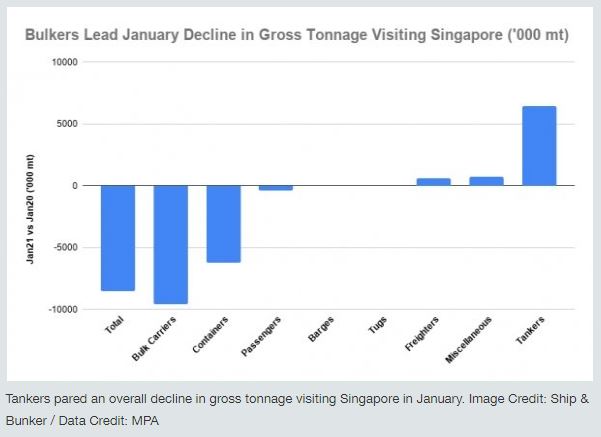 That decline will partly have been driven by a slip in bulkers and container ships visiting Singapore.

These were the two biggest shipping segments driving a year-on-year decline in gross tonnage visiting the city-state in January, losing 9.56 million mt
and 6.26 million mt, respectively.

Fuel Oil Renaissance
January 2021 was the first month for which Singapore’s data broken down by product can be compared on a like-for-like basis with the same month a year earlier, coming a year after the first month of the VLSFO era. 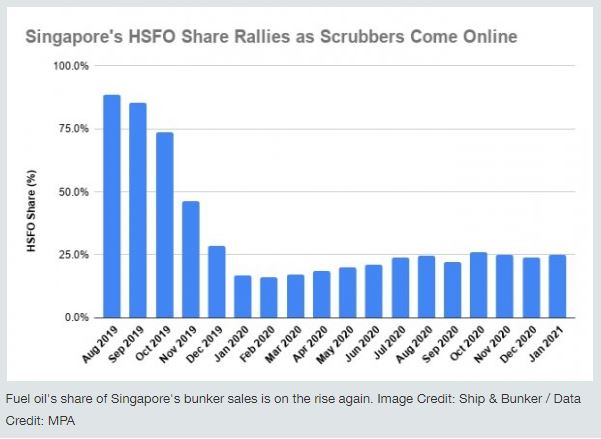 The biggest change visible over that time is the rally in HSFO sales, which gained 47.9% on the year to 1.13 million mt. HSFO’s share of total bunker sales was 25.1% in January, compared with 16.9% a year earlier. VLSFO, marine gas oil and marine diesel oil sales fell by 5.7% on the year to 3.04 million mt.

About Jack Jordan
Jack Jordan is the Managing Editor of Ship & Bunker, the world’s most read marine fuel-focused publication.
He is an experienced financial editor and reporter with a first-class degree in Arabic and Russian, a postgraduate diploma in newspaper journalism and several years’ history of covering the oil and shipping industries and capital markets.
Jack is based in London, UK.