Shipbuilding suspensions in Europe create a window for China 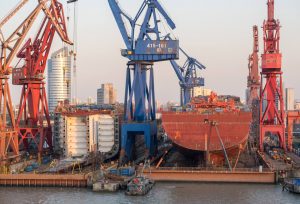 China’s shipbuilding will dominate
Wartsila’s spokesperson said, “As part of this, training on using our engines/ship technology for Russian legal entities has been halted, regardless of the nationality of the individuals. Such training can be offered to Russian nationals working for non-Russian legal entities. Training cannot however be offered to individuals, regardless of their nationality, having their residence in Russia.”

Warsila’s has declared its stance on the prevailing conflict; it does not have risk appetite and will not take any chances. German’s hesitance would not be surprising as the country appealed to the European Union (EU) to review the current sanctions’ effect before slapping on more. The EU is too deep in its reliance on Russia for oil and gas, which explains why all 27 countries could not be on the same page. While they mull over if more sanctions should be imposed, China could be grinning its way to the bank and shipbuilding dominance.

Clarkson’s data revealed China topped the charts in January 2022 with 1.47 compensated gross tonnes (CGT), accounting for 48 per cent market share. Korea trailed behind with 1.38 CGT at 45 per cent and Japan placed third at 90,000 CGT with 3 per cent. China, Japan and Korea are Asia’s leading shipbuilders. The latter two’s in force sanctions on Russia will be a springboard for China to strengthen its edge in shipbuilding, even overtake Korea in the race to the top.

The republic is one of the biggest markets for Russian oil, gas and coal. Shipbuilding might be next till the conflict gets resolved, or there is consensus among the EU on the sanctions – whichever comes first. With almost everything “in place”, China will have stronger leverage in almost any shape and form to be a maritime powerhouse.

Share
Previous Rupee-rouble trade mechanism may wind up ineffective
Next Is India missing a shipbuilding opportunity?