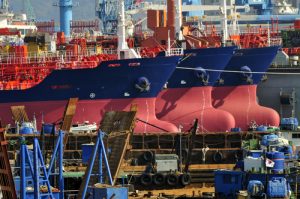 Some orders still took place as the year closes

Shipbroker Clarkson Platou Hellas seemed surprised at recent orders, as it noticed healthy buying momentum in the SnP sector in the year. To begin with, top builders: China, Korea and Japan have all surpassed their quotas for the year.

Last buying sprees
The additional recent orders were just cherries on top, which Clarkson Platou Hellas did not realise. Another shipbroker Banchero Costa noted that “in the dry sector, China’s Chengxi shipyard received an order from domestic company, Huaxia Financial for 4 + 4 x 63k dwt for delivery in 2023 and 2024. This was said to be a fairly short timeline compared to most of the slots which were proposed for late 2024 or into 2025. Price per unit ranged around US$32 million. Another order for Ultramax was signed in Japan where Taiwan Navigation booked 2 x 63k dwt at Oshima with delivery scheduled in 2024.

In the handysize sector, another Taiwanese mega shipowner Wisdom Marine signed a contract for 4 ships which will be built equally at Saiki (where they have newbuildings in place) and Hakodate. No prices were disclosed. Tanker business was scarce whilst a new LNG order emerged for Samsung for 2 x 176k m3 for delivery in January and May 2025. A characteristic of the ships is the twin engine gas fuelled.

Meanwhile, shipbroker Intermodal stood by their observations that the anticipated slow movements were due to the holidays. However, with the exception of the crude carrier market which saw limited interest in newbuilding projects during H2 2021, interest for the rest of the segments was focused on gas carriers and container orders playing the major role in shipyards‘ profitability.