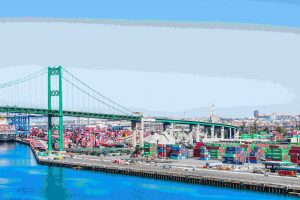 There was a 8.8 per cent drop in throughput compared to the November 2020. The poor performance was attributed to smaller vessels that called on LA Port, given these vessels take nearly as long as mega vessels to process.

Popularity for smaller vessels confirmed
Last month, the Port processed 811, 460 TEUs which translated to a 78,000 TEU drop in comparison to November 2020. This drop was greater at over 90,000 TEUs for September and October. Imports for November 2021 reached 403,444 TEUs, a 13.2 per cent decline compared to the previous year. Loaded exports dropped 36.8 per cent to 82,741 TEUs, making for lowest amount of exports from the Port of Los Angeles since September 2004. Exports have now fallen 33 out of the last 37 months. Vessels were avoiding Los Angeles, as well as Long Beach from the persistent congestions.

Port of Los Angeles’ Executive Director Gene Seroka highlighted that smaller vessels which take nearly as long to process as larger ones are contributing to the year-over-year monthly decline. Half of the 86 container vessels that arrived in November carried less than 5,300 TEU capacity. As at November 2021, the port processed 9,891,021 TEUs, 18.7 per cent more than the same time last year. It expects to move about 809,000 TEU in December 2021, which would still be down from 879,186 moved in December 2020.

Jon Monroe Consulting backed the observation. He told a media that despite ships’ claims of avoiding LA, there remains a long line of vessels offloading. A mega shipowner revised the service to the East Coast: from Asia to Charleston and New York via the Panama Canal. Making sense of the congestion, the number of FEUs’ dwelling is now averaging at 9.3 days, compared to a previous 10, as per data from Pool of Pools’ website.