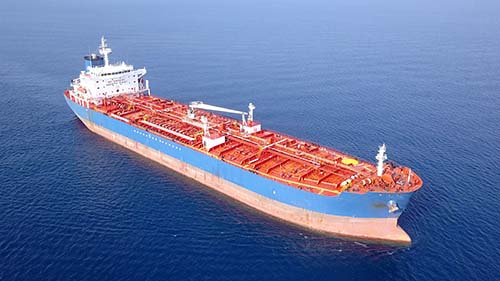 Notably, a group of Chinese shipyards have jointly developed an ammonia fuel-based very large crude carrier (VLCC) design, and received approval in principle (AIP) from the Chinese Ship Classification Association, as well as the American Bureau of Shipping. Korea trailed closely behind, while Japan gets started.

China leading with Korea closely behind
The Chinese builders were the Marine Design & Research Institute of China, which is affiliated with the China State Shipbuilding Corporation (CSSC); COSCO Shipping Heavy Industry (CSHI), which is the shipbuilding arm of COSCO Shipping, China’s largest shipping company; and COSCO Shipping Energy Transportation Company, an affiliate of COSCO Shipping. The design was for a 310,000 dwt VLCC with a main ammonia fuel engine with two C-type ammonia fuel tanks made by MAN Energy Solutions. The dual fuel engine can be replaced with a pure ammonia engine in the future.

Competitors from Korea turned up the heat. Hyundai Heavy Industries (HHI) and Samsung Heavy Industries (SHI) too entered the ring with their own designs. In September 2021, HHI secured an AIP from France’s Bureau Veritas for an ammonia fueled gas carrier, as well as another from Korean Register of Shipping (KR) for an ammonia fuel supply system. In August, SHI received one approval for an ammonia-ready VLCC from the Norwegian ship classification agency DNV. The latter is powered by liquefied natural gas (LNG) or diesel, and compatible with ammonia.

Korea commenced securing of ammonia ship technologies with the help of its government, with focus on developing ammonia engines, fuel tanks, and fuel supply systems. The Ministry of Trade, Industry and Energy and the Ministry of Oceans and Fisheries will invest KRW 254 billion (US$215,000 million) for 10 years from 2022 – 2031 to develop technologies related to the entire cycle of eco-friendly ships. By the end of 2021, a detailed implementation plan will be revealed.