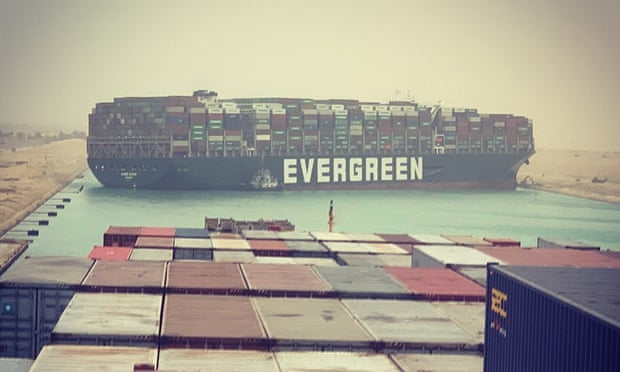 The Ever Given container ship has become stuck, blocking the Suez Canal. Photograph: Julianne Cona/ Instagram. Image Credits: The Guardian

Several attempts to refloat the 400m-long Ever Given have failed, leading to a tailback of other ships

A vast container ship has run aground in the Suez canal and become wedged, causing a traffic jam of vessels at either end of the vital international trade artery.

The 220,000-tonne, 400 metre-long Ever Given – a so-called “mega ship” – became stuck in the canal on Tuesday and several attempts to refloat it failed. Some reports said the Ever Given could have suffered a loss of power, causing it drift into a sideways position.

The Ever Given is one of a new category of ships called ultra large container ships (ULCS), some of which were even too big for the Panama canal that links the Atlantic and Pacific oceans, according to supply chain experts.

The ship, which is carrying hundreds of containers bound for Rotterdam from China, is owned by the Taiwanese shipping company Evergreen and registered in Panama.

Pictures taken from another ship in the canal, the Maersk Denver, show the Ever Given lodged at an angle across the waterway. It dwarfs the tugs sent in by the Egyptian authorities to try to free it, and also a mechanised digger that appeared to be trying to excavate ground in order to free the bow.

Julianne Cona, who posted the picture from the Maersk on Instagram, had watched the drama unfold as her ship waited at anchor.

“Hopefully it won’t be too long but from the looks of it that ship is super stuck,” she wrote. “They had a bunch of tugs trying to pull and push it earlier but it was going nowhere … there is a little excavator trying to dig out the bow.”

She added that after the Ever Given ran aground the ship behind her vessel lost power and “almost hit us so it’s been a fun day”.

Ships have been grounded in the canal before. In 2017, a Japanese ship became stuck but was refloated within hours. A more serious incident occurred near the German port of Hamburg in 2016 when the massive CSCL Indian Ocean ran aground and needed 12 tugs to set it free after five days.

The shipping monitoring site Vesselfinder.com showed the stricken ship surrounded by smaller tugs trying to free it from the banks.

Normally ships form convoys to traverse the Suez north and south up and down the canal. The Ever Given was part of a northbound convoy when the incident occurred, according to shipping agent GAC.

“The ship was fifth in the northbound convoy. None of the vessels before it were affected, but the 15 behind it were detained at anchorages waiting for the canal to be cleared. The southbound convoy was also blocked,” GAC reported.

The canal can handle dozens of giant container ships a day so any lengthy holdup could cause serious delays, although shipping experts expected it to be freed quickly.

But Flavio Macau, a senior lecturer in supply chain management at Edith Cowan University in Western Australia, said one problem was that container ships had become much bigger in recent years, too big even for the Panama Canal.

“Moving about 50 ships a day, the impacts of a stranded ship are negligible unless it takes weeks to float it,” he said. “But that is very unlikely and it should be over in a couple of days, tops.”

Mike Schuler, senior editor of the shipping news site gcaptain.com, said it was not clear exactly what had happened but noted that there was a lot of tugs being moved into place to free the Ever Given.

“There are a lot of tugs on the ship but it takes a lot of power to move a ship of that size. The tide schedule could also come into play because you get tides on the canal.”