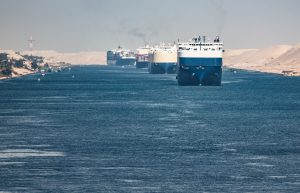 The infamous Ever Given incident last March blocked canal traffic for 6 days and rattled shipping markets. Needless to say, it turned out be a cue for SCA to conceive another expansion plan which is currently underway.

Long road to recovery
SCA Chairman Osama Rabie disclosed the country is currently working to improve the Suez Canal by making an additional 10km accessible to two-way traffic, while widening and deepening by another 30km. He noted it would be too expensive to widen the entire length of the waterway linking the Red Sea and the Mediterranean. However, the two-way portion would be extended to 85km from 75. The objective was mainly to increase traffic safety. Once finished, the transit time to pass through the canal will remain at about 11 hours.

The project’s second phase consists of widening the 30km portion extending south to the mouth of the canal by excavating 40m out of its eastern side. The portion where the Ever Given was grounded, will also be deepened by 1.8m (6ft). Rabie stressed, “This is a difficult portion of the canal.” He highlighted that deepening and widening steps will smooth out bends in the canal at that point, and reduce the impact of southerly winds. The E£3 billion (US$191 million) project will be completed and inaugurated by the end of June 2023.

To refresh one’s memory: the 400m Ever Given vessel ran aground last March, a 2-month saga followed about the compensation SCA demanded and UK Club’s persistent questioning why. The biggest riddle was the halving of the US$900 million claim, corroborated by SCA’s miscalculation declaration. Yet the authority remained unbelievably nonchalant despite having its credibility on the line. The vessel was eventually released in July with substantial publicity, albeit no word on the settlement amount.

The industry can agree on the effectiveness of Suez Canal but shipowners and operators would be more cautious when navigating the route, with the high profile wrangling as a reminder and lesson. For SCA, it has lots of reputation repair to do if it wants to keep its position as a key route.