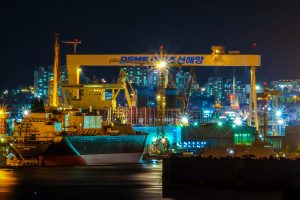 The proposal went through 4 rounds of deferment, and is now close to an official veto

All eyes were on Hyundai Heavy Industries Company Limited’s (HHI) and Daewoo Shipbuilding & Marine Engineering Company Ltd’s (DSME) merger. However, it could only take place after obtaining approvals from South Korea, the European Union (EU), Japan, China, Singapore, and Kazakhstan. To date, only 3 countries – China, Kazakhstan and Singapore gave their approvals.

Monopoly – the biggest threat
After a 4th adjournment, the proposed merger between these 2 Korean heavyweights is likely a no go. HHI’s intent to acquire DSME was not new, and has been in limbo in 2019. Industry observers expected a world largest shipbuilder to emerge after the deal – holding a 21 per cent market share. However, a major media reported that the proposed acquisition is set for an EU antitrust veto after the companies declined to offer remedies to mitigate competition concerns.

HHI expressed disbelief in a statement, “Market dominance cannot be evaluated by market share alone in the shipbuilding industry. It is important to also assess the market based on overall market conditions and dynamics. The shipbuilding market is unable to be structurally dominated by one individual company.” This was in response to the unexpected turn of EU’s impending disapproval, especially when it assumed the EU would concur with China, Kazakhstan and Singapore that expressed zero objections.

Neither the EU nor DSME responded to requests for comments on the twist. European shipping companies are major clientele of both HHI and DSME. Sources familiar with the issue disclosed the EU is focused on liquefied natural gas (LNG) carriers used to transport LNG between Europe and the Middle East and North Africa. Incidentally, Korea happens to be currently centred at developing greener fuels and related vessels.

Clarkson Research Services’ data revealed global ship orders from January – November jumped 138 per cent from the same period a year ago to 45.07 million compensated gross tonnages (CGT). Korean shipyards secured the second largest 38 per cent or 16.96 million CGTs, following China with 49 per cent. Korean shipbuilders bagged orders for LNG carriers with a 199 per cent surge on year from January – November.