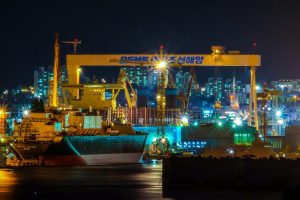 Its setback does not imply the company’s shipbuilding is inferior

DSME has been in the spotlight with Hyundai Heavy Industries Holdings’ (HHIH) when the topic of its merger surfaced. HHIH proposed to acquire debt laden DSME in 2019, only to be hit by the European Union’s (EU) recent disapproval 2 years later for fear of shipbuilding monopoly.

Reading between the lines
DSME’s financial troubles intensified across several years due to lack of orders. Additionally, volatile steel prices made it more difficult for the shipbuilder to deliver orders. Industry observers estimated the Korean shipyard suffered a net loss of KRW1.3 trillion (US$1 billion) in 2021, with sales almost halved.

With its only lifeline cut, DSME is naturally crossed as a direct route to liquidation gradually crystalised. Korea Development Bank (KDB) Chairman Lee Dong-gull expressed discontent towards the decision – calling it “extremely selfish and only prioritising the interests of its member countries.” As DSME’s main creditor, Lee added KDB is prepared to explore other options such as privatisation to address DSME’s crisis. He ruled out injecting fresh funds to avoid Korean enterprises being deemed as incapable and reliant on government support.

On the flip side, Korea’s shipbuilding sector can pride itself as a force to be reckoned with given EU’s honesty about its insecurity. The fear of monopoly is a strong message that Korea’s shipbuilding is powerful in its own right despite intense competition. EU’s consistent trade with Korea is a compliment to the republic for its quality.

While some analysts’ remained adamant that DSME will sink deeper in debt, the industry needs to recognise DSME is also a victim of market forces and has the potential to recover. DSME reportedly posted US$10.8 billion in order intake in 2021, exceeding its order target of US$7.7 billion. For this reason, some observers expected its deficit to reduce this year, and finally, reach a surplus (net profit of KRW50 billion) from 2023. Allied Shipbroking Inc in its latest report revealed UK shipowner Zodiac Maritime ordered 6 firm Dual Fuel LNG 15,600 TEU vessels from DSME for delivery beginning in 2025 at a cost of US$182.8 million per unit. Grecian vessel operator too placed an order for 4 units of 28,000 TEU from DSME at an undisclosed price.