The man behind globalised shipping 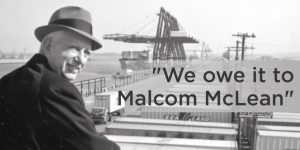 It all started in 1934 when a transport entrepreneur named Malcolm McLean, (who owned a fleet of nearly 1,800 trucks) felt a potential for substantial savings when removing labour from the loading and unloading at ports. His idea of saving money though ruffled some feathers, it became the backbone of world trade today.

Straight off the ships
In 1937, McLean witnessed the substantial amount of resources spent on just break-bulk cargo handling involving stevedores. He toyed with the idea of “straight off the ship” with just the objective of saving on taxes. At that time, trucks moving from port to port will incur fees plus excess weight, more so when the transporting through several states.

The concept of boxes came in the early 1950s when McLean was no longer inclined to park his trucks onboard ships and watch crew unload and load cargo at speeds which he knew could be accelerated. He then took a leap of faith and sold his trucking business to acquire Pan-Atlantic Tanker Co, where 2 tankers were converted to carry boxes on and under deck. Incidentally, United States’ regulations disallowed a trucking company to own a shipping line. McLean subsequently renamed his venture to “Sea-Land Shipping”.

His first boxship, Ideal X made her maiden voyage in April 1956, witnessed by some 100 dignitaries. While it was a landmark moment in shipping history, a top official Freddy Fields from International Longshoremen’s Association, gave a curt reply when asked what he thought of the newly fitted container ship. He said, “I’d like to sink that son of a bitch,” – essentially grimacing at the demise of stevedores’ livelihoods.

Putting it in perspective, hand-loading a ship back then cost US$5.86 a tonne. With containers, it cost only US$0.16 a tonne – a 36-fold savings. It also greatly reduced the time to load and unload ships. McLean built his business by the principle “A ship earns money only when she’s at sea”. Today, ports have incorporated automation in their operations and throughput skyrocketed. Innovation might have been a thorn for some, it was a lucrative business for many. As much as Fields objected to McLean’s idea, nobody can disagree with the latter given shipping accounts for 90 per cent of world trade today.