The real cost to pay 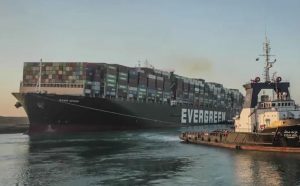 Evergreen Marine had an eventful 2021 – the Suez Canal fiasco in March, and a COVID-19 related death in June. In March 2022, another vessel ran aground for not keeping the speed limit. The shipowner’s sporadic declarations to get itself off the hook may result in reputation damage.

A long service recovery
Richard Dickman, Legal Director of Pinsent Masons defined forced majeure in relation to the Suez Canal incident, “Depending on the wording, the force majeure clause would excuse the shipowner from delay or failure to perform for specified reasons, typically including accidents.” That was the Evergreen’s escape route. In June, another Evergreen vessel had a captain passed away of COVID-19 onboard. Its alliance partner Hapag-Lloyd in its advisory said force majeure has been declared, no Asian ports are accepting the vessel. The vessel had to divert to Italy first to repatriate the captain.

Last March, Ever Forward lodged on the bottom north of the Bay Bridge. Attempts to refloat the vessel failed, Evergreen dished a General Average (GA). In a statement, Evergreen said GA has been declared “in light of the increasing costs arising from the continued attempts to refloat the vessel.” The GA clause establishes that all sea cargo stakeholders (owner, shipper, etc.) evenly share any damage or losses that may occur as a result of voluntary sacrifice of part of the vessel or cargo to save the whole in an emergency.

The clause from York-Antwerp Rules, 2016 update stated: “There is a general average act when, and only when, any extraordinary sacrifice or expenditure is intentionally and reasonably made or incurred for the common safety for the purpose of preserving from peril the property involved in a common maritime adventure.”

Evergreen has to consider the implications of regularly evading accountability, especially with Ever Forward’s incident still under investigation. Cargo owners would naturally question the rationale of having to foot part of the bill in refloating efforts. This will essentially subject Evergreen Marine to a long process of service recovery which is far more costly.