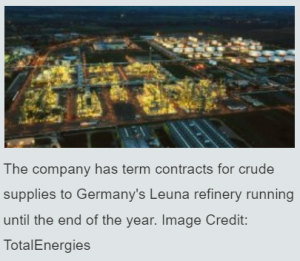 Repost: French energy producer TotalEnergies has committed to halting its purchases of Russian oil by the end of the year, but said it will continue to buy Russian gas.

The firm will stop all purchases of Russian crude and refined products by the end of 2022 ‘at the latest’, it said in a statement on its website on Tuesday. The company has term contracts for crude supplies to Germany’s Leuna refinery running until the end of the year, as well as gasoil contracts of similar length.

“TotalEnergies reaffirms its firmest condemnation of Russia’s military aggression against Ukraine, which has tragic consequences for the Ukrainian population and threatens peace in Europe,” the company said in the statement.

But the company will not stop its gas purchases in the short term, it said.

“Contrary to oil, it is apparent that Europe’s gas logistics capacities make it difficult to refrain from importing Russian gas in the next two to three years without impacting the continent’s energy supply,” the company said.

“In accordance with the European Union’s decisions to maintain at this stage Russian gas governments consider that Russian gas is necessary.”

This decision to continue dealing in Russian gas may present a dilemma to buyers of LNG as a bunker fuel in Europe. While most gas-fired power plants have no choice but to continue consuming gas, there are a significant number of LNG-fuelled ships that are dual-fuelled, and could switch to burning VLSFO if their owners wanted to avoid buying gas of Russian origin.

A spokesperson for CMA CGM, the world’s largest buyer of LNG as a bunker fuel, declined to comment on the company’s attitude to buying Russian gas when contacted by Ship & Bunker earlier this month. TotalEnergies is the main supplier of LNG to the CMA CGM fleet.