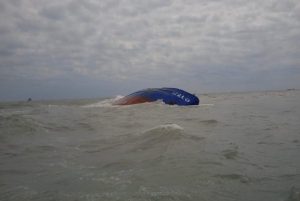 Repost: Bunker tanker Xelo carrying 750 tonnes of fuel from Egypt to Malta sank in Tunisia’s Gulf of Gabes on Saturday (16 April), according to Tunisian authorities.

The tanker began taking water, including in the engine room, some seven kilometres offshore in the Gulf of Gabes, said a Tunisian environment ministry statement.

All seven crew members, consisting of a Georgian captain, four Turks and two Azerbaijanis,  were evacuated.

The 58-metre Equatorial Guinea-flagged tanker was en route from Damietta, Egypt, to Malta when it requested refuge from rough seas in the Gulf of Gabes on Tunisia’s south-east coast.

Turnisia’s Transport Minister Rabii Mjidi reportedly said no leakage of fuel had been seen from the Xelo.

Tunisian navy divers have secured the vessel before a complicated operation to pump out the cargo begins.