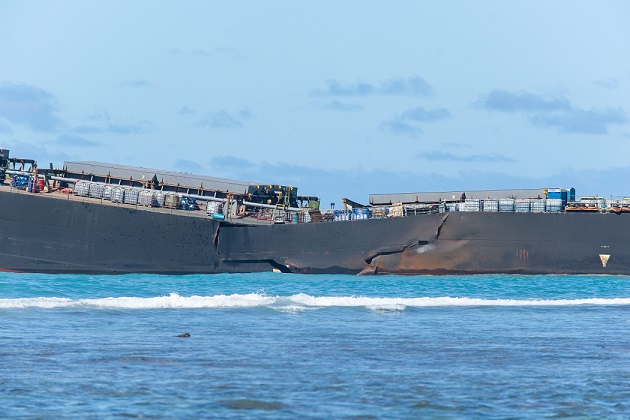 The massive oil spill which occurred in south of Mauritius last July started a string of speculations on possible causes. Among the listed were bad weather, improper charts deployment to overwhelming need for mobile phone signals. However, the lack of supervision, monitoring and focus were the obvious causes.

Japan-based Mitsui OSK Lines revealed that the reason for the accident was the intention to enter an area within the communication range of mobile phones, outweighing the importance of appropriate watch-keeping both visually and by radar. The shipping conglomerate took the opportunity to unveil its latest safety measures including due diligence in the selection of crew on chartered ships.

Mitsui commissioned the Wakashio newcastlemax, an Okiyo Maritime Corp. owned 300m long vessel. While en route to Brazil from Asia, the vessel deviated from its course, running above pristine coral reefs. The carrier would go on to break into two, spilling more than 1000 tonnes of fuel. Scientists noted this incident as Mauritius’ worst environmental disaster in history.

Investigations revealed the crew was chasing after mobile phone signals and resulted in inching too close to land, much to the denial of local enforcement. Additionally, Mitsui was certain its fleet was equipped with unlimited internet access. The ship’s captain and deputy were taken into custody on suspicion of negligence.

Mauritius Prime Minister Pravind Kumar Jugnauth declared a “state of environmental emergency” and appealed for international assistance. The French government sent both military and civilian equipment with personnel, along with Japan’s deployment of specialists to help with the cleanup. India also lent its hand with 30 tonnes of technical and material, accompanied with a 10-member team specialising in oil spill containing. Restoration of the coastline is expected to conclude in early 2021.

While the cause of the spill is widely attributed to the incorrect nautical charts, scrutiny was on the selection of senior officers. A statement by Panama Maritime Authority (AMP) said it’s the first time that the captain of the ship, the chief engineer, and the first officer were on the navigation bridge when “this improper approach took place.”

AMP also confirmed that Mauritius detected the change in course, and repeated calls to the Wakashio from shore stations went unanswered. AMP’s investigators believed there were people with sufficient experience in assessing the problem on the navigation bridge in the moments leading up to the grounding. “With an appropriate assessment safeguard and good seamanship practices, that should have generated an analysis which would have enabled quick pertinent actions to be taken to correct the situation,” AMP noted in an update.

The estimated $10b damage has now sent lawyers scrambling through their insurance policies on possible implications. Clearly, the outcome would have been different if all crew members received adequate training on safety and navigation before deployment.