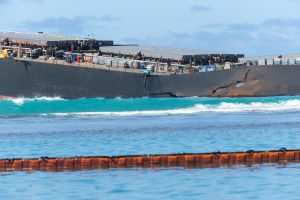 US$10 billion bill for the damage
For compromising safety under the Merchant Shipping Act, both captain Sunil Kumar Nandeshwar, and his first mate, Hitihamillage Subodha Janendra Tilakaratna, faced the music in court. The MV Wakashio which they piloted ran aground off Mauritius, and resulted in a massive oil spill plus the vessel’s splitting into half in water.

The accident was initially attributed to the crew’s desperate chase for phone signals and hence overlooked the ship’s nautical bearing. Based on the crew’s testimony, MV Wakashio’s failure to follow safety procedures was the cause of the accident. Its Japanese owner, Nagashiki Shipping has pledged to train its crew and ban the usage of private mobile phones onboard during working hours.

On the other hand, the 200,000 dwt vessel was supposed to be 12 nautical miles from the coastline. It ended up on the reefs 900 m from Pointe d’Esny, and reflected the Mauritian Coast Guard’s lack of control and responsiveness. In other words, circumstantial findings suggested more parties contributed to the accident with their own negligence.

The damage from the oil spill was estimated to be US$10 billion. However, claims at this amount remained debatable within the industry. Nevertheless, this expensive lesson stressed the need for vigilance and distraction-free operations onboard. Both defendants will be sentenced on 27 December 2021. 16 remaining Filipino crew members of the MV Wakashio were repatriated last June and August.