Who is accountable for maritime accidents? 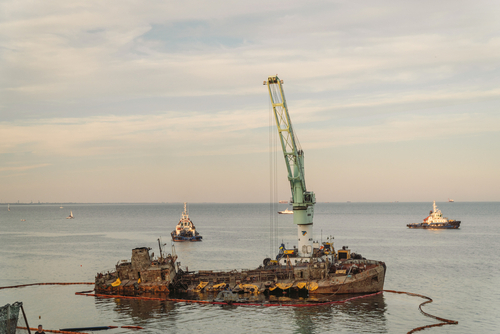 Shipping goods from one place to another has risks – underscoring the importance of marine insurance. However, things get tricky when insurers question the nature of the claims. One perfect case study is Ever Given’s saga.

The lengthy battle between the Suez Canal Authority (SCA) and Shoei Kisen Kaisha (Ever Given’s owner) appears to be in remission. In the spotlight now is the X-Press Pearl which sank after burning for 13 days in Sri Lanka. It was loaded with 25 tonnes of nitric acid, sodium hydroxide amongst other chemicals. Some spills and waste were spotted ashore – causing speculations on environmental impacts.

Singapore-flagged X-Press Pearl was sailing from India to Colombo when it caught fire on 20 May 2021 off the west coast of Sri Lanka. The Maritime and Port Authority of Singapore (MPA) said on 2 June 2021 it is communicating with the Sri Lankan authorities and other parties to minimise the environmental impact of the incident.

In principle, Singapore has both the authority and responsibility to enforce regulations on registered vessels, including inspection, certification, and issuance of safety and pollution prevention. However, it is not typical for flag states to take on the liabilities from marine incidents. This is illustrated by Ever Given’s incident where Panama was not named a “defendant” in SCA’s claim.

The classic case of the SS Torrey Canyon oil spill 1967 resulted in the International Maritime Organisation’s (IMO) debate on liability and compensation. Torrey Canyon was the largest vessel involved in the history of marine environment disasters. An ad hoc legal committee was formed to deal with the questions concerning the incident. This committee ended up as part of the IMO Council, which converges twice a year to deal with maritime legal issues. The million-dollar question was who is liable for the damages. For Torrey Canyon’s case, IMO billed in 1969 that adequate compensation has to be paid to victims by the shipowner in oil pollution cases.

Taking a step further, insurers would likely dissect the incident down to the root cause of the accident. Subject to the evidence admitted in court, the liability may not rest on the shipowner’s shoulders.

Share
Previous Bunker Supplier Peninsula Targets 15 Million MT of Bunker Sales in 2021
Next How will maritime deal with the “endemic”?