Who patented the ballast tank system? 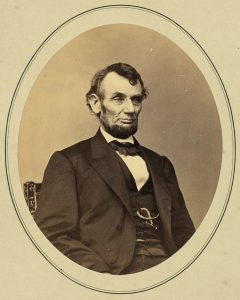 Anyone who thought the legendary Abraham Lincoln was only the former country leader supremely against slavery would be dumbstruck. Apart from being trained in law, Lincoln was also the man behind the cargo vessel’s ballast tank system first patent in 1849.

What was the ballast tank about?
The purpose of the ballast tank is to maintain vessel stability on water. In the 19th century, cargo boats returning from Europe to North America would carry quarried stone as ballast. They contributed to the architectural heritage of some east coast cities (for example Montreal), where this stone was used in building. In the earlier days, sandbags, rocks and iron blocks were the common materials used – typically loaded underneath the cargo.

Lincoln reportedly patented a ballast-tank system to enable cargo vessels to pass over shoals in North American rivers in 1849. He conceived the invention on two occasions when his boat on got hung up on obstructions. Lincoln’s device was composed of large bellows attached to the sides of a boat that were expandable due to air chambers. Filed on 10 March 1849, Lincoln’s patent was issued as Patent No. 6,469 later that year on 22 May.

Today, ballast refers to the water in which the vessel is floating at the time of ballasting, such as seawater, pumped into tanks. They are connected to pumps that drain or inject water. Crew fill these tanks to add weight to the ship and improve its stability when it is not carrying cargo. In extreme conditions, a crew may pump ballast water into dedicated cargo spaces to add extra weight during heavy weather or to pass under low bridges.

Ballast tanks also play a role in nautical safety – by changing the moments of inertia which affect motion in a seaway. International agreements under the Safety Of Life At Sea (SOLAS) Convention require cargo vessels and passenger ships be constructed to withstand certain kinds of damage. The criteria specify the separation of compartments within the vessel, and the subdivision of those compartments. These International agreements rely on the states that signed the agreement to implement the regulations within their waters and on vessels entitled to fly their flag. Ballast may be used to compensate for stability losses due to flooding of some compartments.