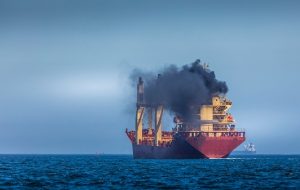 Majority agreed at the COP26 summit that conditions were no longer conducive for net zero. To begin with, overall temperature has risen to a degree impossible to contain. The obvious immediate action would be adopting greener fuels, which is another process that involves more costs.

Eyes on everyone
It was appalling that International Maritime Organisation’s (IMO) efforts to reduce carbon emissions by at least 40 per cent before 2030 was misaligned with the 2015 Paris Agreement. To refresh one’s memory, the Agreement referred to have global warming capped at 1.5°C (2.7°F). Unfortunately, United Nations’ World Meteorological Organisation (WMO) disclosed the industry is acutely off-course in reducing greenhouse gas (GHG) emissions.

Its GHG Bulletin showed the concentration of carbon dioxide (CO2) reached 413.2 parts per million in 2020 – nearly 150 per cent of the pre-industrial level. The last time Earth experienced a comparable concentration of CO2 was 3-5 million years ago, when the temperature was 2-3°C warmer and sea level was 30-60ft (9-18m) higher than today.

China pledged to achieve carbon neutrality before 2060; cut carbon dioxide (CO2) emissions per unit of GDP by over 65 per cent in 2030 compared with 2005; boost non-fossil fuels’ share of the energy mix to 25 per cent by 2030; and expand forest stocks and installed capacity of wind and solar power. The country is named as one of the largest carbon emitters. While it is clear actions are needed to address climate challenges, it remains to be seen if the world would catch up given the current temperature situations.

Alternative fuels (or not)?
Elsewhere, companies are actively demonstrating their commitment towards net zero through alternative marine fuels. Ammonia is one of the hottest options now given the world’s top shipbuilders are racing to develop ammonia-fuelled vessels; with China, Japan and Korea reportedly developing their own vessels.

Liquefied natural gas (LNG) is also touted as the cleanest fossil fuel and an excellent alternative to reduce GHG emissions and combat global warming. Korea secured some US$44.5 billion worth of orders as at 5 December 2021, doubling last year’s orders of US$21.1 billion. Before this, the country was exploring ammonia-powered vessels which were required to be LNG compatible as well. Nonetheless, costs will also reveal the industry’s commitment. Greener fuels are definitely more expensive and would businesses be prepared to invest in green initiatives or put their balance sheets above everything?